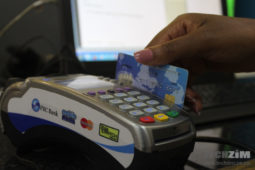 Zimbabweans are survivors. They are enterprising, scheming, intelligent and as they are always telling anyone who can listen, they are one of the most literate people on the continent.

No matter what life has thrown their way they have found a way around it. Like a cat they always seem to land on their feet somehow.

Currently and for the past two years or so the most pressing stone in our shoes has been the liquidity crisis which has spawned the current cash crisis as people spent hours in queues trying to withdraw money from their bank accounts. Enterprising cash deals have resurfaced and are now back in business.

Like all things the smart ones and the not so smart ones among us have already pondered the problem and presented the solutions:

While solution 2 has been met with fierce resistance everyone agrees with solution 1 in principle. More could be done in implementing this solution.

Recently I went into town to do my monthly shopping. While my bank is one of the few that still allows me to withdraw a decent living amount with little fuss I decided to investigate how well the promotion of plastic money is being carried out and suffice to say I was more than disappointed by the results.

While most retailers, clothes shops, and big utility providers now have Zimswitch enabled Point of Sale (POS) machines everyone else seemed to have missed the memo.

All the major wholesalers I visited did not have a Zimswitch enabled point of sale. This is despite the fact that some of these wholesalers have sales running into millions of dollars every month.

Despite the fact that it would boost their sales most of these will only take cash. Only a couple of them accept mobile money options like Ecocash and Telecash. The reason was,

As to why most retailers did not have a handheld POS machine one of the guys answered my question with a question. “Do you know where I can get one?”

I realised I did not have an answer to this question. You would be forgiven for thinking that given the current cash crisis these little hand held thingies would be selling faster than bananas.

My first port of call was to go back to my bank and make an inquiry since I had seen their machines in places.

After being directed to the information desk my question was met with a blank look. It seems the lady also had no idea. She said she would talk to her manager and get back to me. After leaving my details I am still waiting for a response.

Since it was getting late I hopped into a kombi that as usual demanded its fare in cash. Upon arriving home I decided to engage in some amateur sleuthing. I called up Google my ever knowledgeable friend. I am very good at finding information, I think and what I discovered was quite puzzling.

Unless you are looking for thermal receipt printers and a run of the mill POS machine, finding a Zimswitch handheld POS machine is unnecessarily hard.

The banks did not make it easy. After getting in contact with loads of them and receiving promises that they would contact me directly I have zero responses to show for it. It kind of reminds me of my ill-fated attempts to find a job as a graduate several years ago.

It would seem while there is a concerted effort by various financial institutions to market their plastic money offerings no one seems bothered by the fact that there is still a limited number of places where you can use these cards anywhere.

Getting a card is like buying skiing equipment in Zimbabwe. Unless you find an ATM to stick into and hope there is money in it, you are not going to find much to do with it. I have a shiny two-year-old bank card to prove it.

More needs to be done to stem the current scourge without resorting to the nuke option that number 2 is:

Right now it is rather too hard to find a POS machine that allows you to swipe. Maybe the enterprising spirit of Zimbabweans is finally broken?

11 thoughts on “Zimbabwe is ready for plastic money as a cash crisis solution? Try looking for a POS machine”