EcoShopper was launched early last year, 2015, and should have celebrated its 1st year birthday some time in May this year but the cake and celebrations were put aside.

From my conversations with people, little is known of Econet’s EcoShopper as a brand and as a hybrid mobile and e-commerce online shopping service, powered by EcoCash in partnership with National Foods, and I might know why.

EcoShopper was launched as a service that allowed you to purchase a pre-selected grocery “basket” from their website www.ecoshopper.co.zw or via a mobile application which you  would then pay for via the Eco-Cash payment system and collect at your selected National Foods Depot.

Harare Depots  include Workington, Willowvale, Aspindale and Mbare as collection options and other countrywide locations are  available on their website. The service was also available as an App on Android and IOS devices but I could not find it on either Google’s PlayStore or Apple’s AppStore, suggesting it may have been discontinued on both platforms.

The EcoShopper grocery basket contains products exclusive to National Foods except for Schweppes Mazowe Orange Crush, which for obvious reasons had to be included. The baskets range from $20 Quick Meal Basket to a $150 Monthly Basics basket and they also offer a chicken business starter pack for $299.

So with this in mind I decided to try out the EcoShopper Service and buy the $20 Quick Meal Basket and share my experience, but, before even trying to make a purchase and losing my money to a discontinued service, I sent the Econet Customer Support team a tweet and their response was both timely and very positive:

With these reassuring words I went ahead with the purchase. I followed the usual routine, visited my local EcoCash agent, Cashed-In, waited for change, and set off in the direction of Workington as i had already figured it to be the closest.

The purchase was relatively smooth, its a two stage payment approach which requires you to action the payment via their website with your name, I.D. and phone number then authenticate the request via your mobile eco-cash platform, hence the hybrid e/m-commerce theory.

The transaction was cleared and I got an approval SMS which had the transaction code and merchant number of the Workington depot, this later proved to be very important. Eco-Cash charged me about $0.40 for this transaction but what came next was a bit of a shocker. 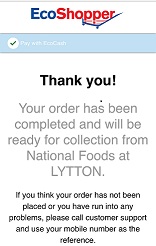 After driving 17 km and burning X amount of fuel, my colleague and I arrived at the  Lytton Road Depot in Workington. There was no visible presence of EcoShopper, so we went inside the main building.

The first till operators we spoke to seemed to have no knowledge of EcoShopper or any experience in dealing with it, so they directed us to the “Manager’s Office”. We made our way to the back of the wholesale/depot warehouse, where we found the “Manager”.

A very stern character, he greeted us with reasonable concern in his eyes, we told him of the purchase we made and were shocked to hear that not only have we come too early, minimum time for transaction to make its way to their depot system is 1 hr but they recommend collection after 24hrs, but he too was unsure of the service and directed us back to the till operators  to look for a specific operator by name who had some form of experience dealing with the service.

While we waited for the till operator we had a chance to browse the shop floor and do a quick price comparison between the $20 fixed basket price and buying individual items. Surprising, we found that two of the products, cooking oil and baked beans were out of stock, and that buying the products individually totaled $17.30 (rounded-off) compared to the $20 fixed price.

By the time we were done with the price comparison, the till operator was available. We introduced ourselves and our story, luckily the gentleman we spoke to was a very jovial character and gave us some clarity on EcoShopper. He advised that:

Disappointed with the outcome, we decided to leave. In a fit of rage (not really), I requested my eco-cash payment to be reversed, and Im still waiting 24 hrs for the reversal to happen.

As soon as my money reflects back in my Ecowallet I will conduct another investigation with a reputable e-commerce online shopping service provider to see how they perform with a simple purchase request.

If you are still wondering why I conducted this investigation, its quite simple, I wanted to know the state of e-commerce in Zimbabwe.

There is a real need to take a look at what was done, what is being done and what could be done to utilize e-commerce as a viable platform to conduct business in Zimbabwe.

I believe that Econet failed to utilize its presence to offer a more convenient shopping experience that could rival traditional methods of visiting shops.

The fact that a delivery system was never put in place by Econet or in partnership with a local courier service leaves much to be improved.

The Eco-Shopper system is too rigid and expects people to take up what they are offering rather than choose what they actually want with variety playing a key role in shopping experience.