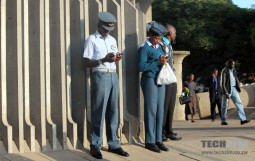 Zimbabwe’s ICT Policy was recently approved by the cabinet and there has been a lot that’s been a lot of talk about the draft computer Crime and Cybercrime Bill.

One other piece of ICT legislation that’s also on the cards is the draft Data Protect Bill. It’s meant to be the piece of legislation that governs how personal information is processed by public and private entities while guarding against the illegal collection and use of personal data.

Sometime last year we published an article exploring some of the clauses in the draft Bill which included the government’s plans to set up the Data Protection Authority of Zimbabwe to oversee all issues related to data protection.

Just like the draft Cybercrime Bill and the e-transactions bill it hasn’t been passed as law and citizens are urged to take a look at and make their own contributions to the crafting process through their legislators or through bodies that are actively involved in the process like the Digital Society of Zimbabwe, MISA, and Veritas.

You  can access a pdf version of the draft bill by following the link below.

One thought on “Here’s a copy of Zimbabwe’s draft Data Protection Bill, the law meant to protect you from data theft”