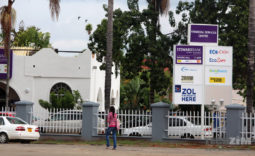 Steward Bank, an Econet Wireless subsidiary, told Techzim recently that their banking network now has some 3,000 agents spread across the country. Agent Banking Manager, Ruth Takawira, told us in an interview that its agents are now transacting $3-6 million dollars a month.

The bank launched agent banking back in November 2014 initially with just Econet’s EcoCash agents. Eventually though, agents outside the Econet family were roped in, most notably, Zimpost and Metro Peech. Customers can make deposits, withdrawals and pay bills at these agents.

Takawira gives credit for the success of their agent banking model to their opening up of their network to customers of other banks. Since October 2015, non-Steward Bank customers can do banking at these agents and Takawira says this, especially in rural areas where other banks have a limited number of branches, has been a huge convenience.

“If you go in the rural areas, the concept has worked very very well because we already have customers for other banks there who have cards but can’t travel all the way to town to access their banks, so they flock to our agents” Takawira explained to us.

Interestingly, Takawira noted, the opening up to other banks actually helped grow Steward Bank’s own direct customers. At the time they opened up their network, only about 10% of the transactions were by the bank’s account holders, but they have since grown their account base to the point they account for up to 70% of the transactions on the agent network.

As for how many those account holders are, Takawira said they are now about 150,000 individual accounts, with 120,000 being reduced KYC accounts (that is accounts that don’t require the heavy documentation traditional needed to open a bank account).

It’s quite remarkable that Steward Bank grew its direct customers this way, but not quite surprising. The bank seems to understand the shifting landscape of the provision of financial services.

Speaking at a conference recently, the bank’s CEO, Lance Mambondiani, pointed out that as a bank they had embraced that customers don’t need banks but need banking. He explained the emerging concept in the financial services industry of Banking as a Service (BaaS) – essentially, a provider of financial services doesn’t need to have the traditional bank branch infrastructure as a competitive advantage; technology and the distribution networks it enables are key in comparison.