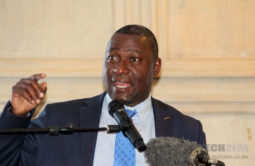 Social media isn’t regulated in Zimbabwe but in the past few months, there have been a lot of suggestions that such a situation could become a reality in the near future.

Following a spike in politically motivated content that has been shared through platforms like WhatsApp and Facebook, there have been a string of warnings issued by the government urging citizens to refrain from social media abuse.

There was also a recent report in state-owned media highlighting how the country’s proposed cybercrime bill will allow for the arrest of social media abusers.

All this has raised questions about the government’s intentions, especially in light of the potential restrictions on citizens’ freedom of expression.

The Minister of ICT, Supa Mandiwanzira was quizzed about these developments via Twitter by people interested in the government’s plans for social media use as well as the draft cybercrime legislation.

In his responses, Mandiwanzira pointed out how the CybercrimeBill is only a draft undergoing consultation and not yet law while also drawing on examples of arrests made by United States police as part of efforts to deal with social media misuse.

@Auzano@TelegraphNews A public consultation for a Bill does not mean it is now law. We expect your journalists to know better!

While defending the idea behind the Cybercrime Bill he also responded to questions about the timing of the adoption of the same bill which has been viewed by some people as a response to the growing online political participation.

@DougColtart @chukulaz @TheSun @amirkingkhan The Bill seeks to stop incitement to violence. Same as anywhere else in the world. Same same!

@platcert @LloydMsipa @263Chat @TrevorNcube @giggz83 it’s been in the works nearly five years now. This is the right time to push it

The Minister’s engagement with citizens via Twitter is in itself a welcome case of state officials communicating with people and clarifying grey areas that could have been miscommunicated – though the irony isn’t lost on how social media is enabling this.

At the same time, the responses are hardly surprising. They essentially reinforce what the government has been communicating over the past few months.

As much as social media offers a wonderful way to express ideas and engage with everyone, in the government’s eyes, it is also a space that isn’t beyond any form of regulation.