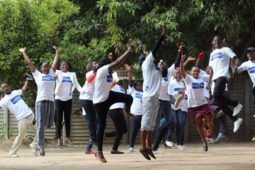 As the access to the internet increase and more and more people switching towards using ‘over the top’ services such as WhatsApp, Twitter and Facebook the old means of communication called SMS may slowly be losing its appeal.

Having appeared on mobile devices as far back as the 1980s, the communication medium though having taken a beating over the years, refuses to give up the ghost. If you ask yourself when last you interacted with SMS, most probably the answer would point to you either receiving a call-me-back or some notification from your mobile money wallet advising you that money had entered your account (we won’t talk about those messages that the mobile networks sends to you almost on the hour as if to remind you that your cellphone is still working).

But there’s someone out there who’s using the communication medium for the ‘good’.

The United Nations program that provides long-term humanitarian and developmental assistance to children and mothers is presently embracing SMS technology in a big way in Zimbabwe.

Running an operation coined the U-Report, this is essentially an SMS platform that allows them to poll young people on different development issues in and around Zimbabwe allowing them (UNICEF and ZYC) to identify hotspots for areas affected by various issues; i.e food security, drought, child marriages, drug abuse, HIV testing and counselling services and even access to adolescent sexual reproductive health. Visit www.zimbabwe.ureport.in for results of these and other polls.

Once the results are in from these polls, they will be used for evidence based programming by UNICEF and ZYC will lead the advocacy work with all stakeholders especially the Government of Zimbabwe to affect and include the voices of the respondents in policy making.

Essentially subscribers sign up to the U-Report by sending a specific keyword to  33500 (from any mobile network) after which a simple once-off profiling takes place answering questions such as whether you’re male or female, your age and what name you’d like to us (if you prefer you can use a nickname instead).

Once this has been done, based on the answers that you’ve given you’ll be sent a 4-8 question poll, asking questions for a specific topic that UNICEF will be researching for that particular week.

UNICEF have developed the technology in such a way that your number remains anonymous on their system to the extent that they can’t even see you by your number, but by a unique username that you’ll be given.

The best part? It’s totally FREE to the respondents (end users) and because done through SMS, the need for access to the internet is non-existent.

Techzim have teamed up with UNICEF and come up with a simple poll that will help us understand what the internet needs of Zimbabweans are. No more than 6 questions you’ll be in and out of it faster than being answered by a certain mobile network’s call centre agents.

6 thoughts on “Does SMS still have any value?”