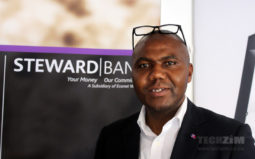 The strategy, according to Mambondiani, has been to reduce the costs of banking (a concept the bank has come to call Free Banking) and then scaling up. The key product driving those sign-ups is the iSave account, whose growth we wrote about separately last week.

We also touched on Banking as a Service last week, and in our interview, had the opportunity to discuss this strategy with Mambondiani. Steward Bank, according to him, is on its way to building the “biggest financial services platform” offering not just the regular banking, but all kinds of payment services.

If there’s someone that has an API for a service that we’re not offering and they can plug it into any of  the things that we’re doing, then we share a commission, that’s the model that we want.

As long as the service costs have been reduced and it’s scalable so that we can offer it to anybody, whether they are our customer or not.

The thinking is ofcourse far from the traditional bank thinking. Mambondiani said right it’s about building their account base as much as possible, and eventually, when they have hit 350,000 plus accounts, to upsell those account holders with new products. At a minimum 3,000 new accounts a day, and with 150,000 accounts already in the bag, that target is only a couple of months away.

More and more as you consider this thinking inside the bank, Steward Bank feels like a fintech startup than a regular bank. Ofcourse they are not without competition in that space as it’s really a global race for making payments and transfers as easy possible to make, especially for the unbanked.

Zimbabwean startups vying to become the central place for digital payments include M-vendr, which recently introduced value remittances, enabling Zimbabweans in and out of Zimbabwe, to use an app buy Multichoice pay TV subscriptions, ZESA tokens, water bills, school fees. GetCash too are onto this prize too. Steward Bank’s opportunity though is quite unique in 3,000 direct agents plus the 50,000 plus Econet agents and merchants that they can tap into.