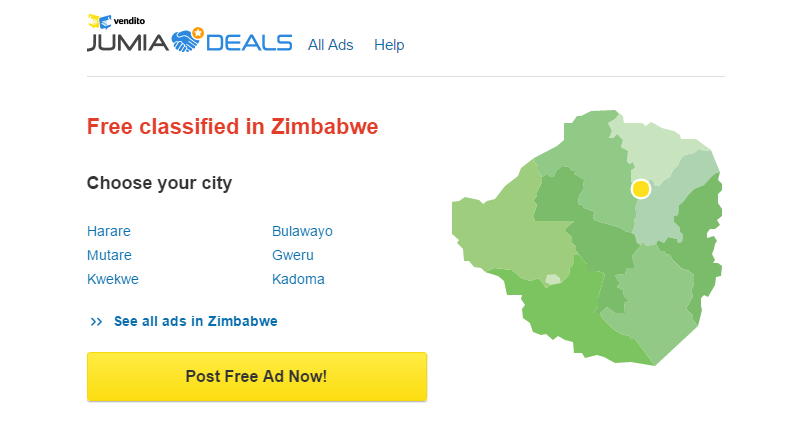 It has been a while since we have written about Rocket Internet in Zimbabwe or their wider African operations. That doesn’t mean they haven’t been active. A lot has happened at the startup clone factory in the past several months; from the plummeting of their share price following loss of confidence in their business model, to them deciding to roll their African startups into one brand called Jumia.

This week though, we noticed something that we hadn’t noticed yet. Rocket Internet now has a general classifieds site in Zimbabwe, called Jumia Deals. This is in addition to the property classifieds website that launched in 2014 (called Lamudi then but now rebranded to Jumia Houses) and the Jumia Travel (formerly Jovago).

Ofcourse the local market is not without heavy competition already. Webdev’s Classifieds.co.zw continues to be the dominant online marketplace in Zimbabwe, and there’s the relatively new entrant by Econet Wireless called Ownai, which may be in second place, or maybe third depending on how Rocket is doing so far.

I expected Rocket to be in retreat mode, especially after the closure of startups like Jumia Market just next door in Zambia, so this move is quite interesting and makes one wonder if other Jumias may be introduced in coming months. Others like Food, Cars, Jobs (still somewhat vacant in Zimbabwe) and Jumia Market itself.

In classifieds, size of warchest doesn’t always translate to success, and this is evident in Rocket Internet’s own struggle with Lamudi despite an initial splash of money on Facebook and Google ads, and even some rumoured unethical behaviour of stealing ads from their competition to seed their site. It doesn’t help that Rocket Internet, globally is dealing with what looks like a bursting bubble. It’s worse that they also have the problem of a fracturing relationship with one of the key partners – Kinnevik which owns Millicom – in the African joint venture that is rolling out these operations.

Econet may also be struggling to get meaningful traction with Ownai. Even though the company has refused to share traffic stats, indications by traffic monitoring tools are that the traffic may be disappointingly low despite zero rating on the country’s largest mobile network.