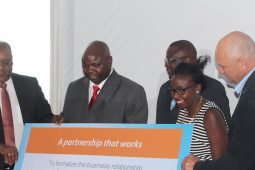 Executives from EcoCash and Mukuru at the announcement of their partnership

It’s similar to the arrangement that Mukuru has with Telecel Zimbabwe’s Telecash mobile money service.

Through this tie up Zimbabweans in source markets (South Africa and the United Kingdom) sending money via Mukuru can send funds directly to recipients’ EcoCash wallets.

Recipients can then perform any EcoCash related transactions with the funds, including cashouts

While recipients will not incur any charges for money that is sent into their EcoCash wallets, the sender will have to pay a commission of between 5% and 8% for each transfer.

Signs of EcoCash Diaspora struggles, a response to the bond note or both?

For anyone who’s been following the trail left by EcoCash Diaspora or used the EcoCash platform to receive money from abroad, this arrangement isn’t anything new.

It’s just the latest of EcoCash’s remittances tie-ups and as such it offers the same value proposition for subscribers while expanding the channels at the disposal of the money transfer outfit (in this case, Mukuru).

Zimbabwe is set to introduce a foreign currency alternative in the form of bond notes, so cashless alternatives such as direct-to-wallet remittances are a strategic move not only for EcoCash but for companies like Mukuru.

With dwindling foreign currency reserves and a catalyst for cash shortages like a pseudo local currency on the way all formal avenues that ordinarily provide cash solutions are at risk. Having an e-solution isn’t such a bad idea.

At the same time, it also appears to be another checkpoint in EcoCash’s efforts plan to slowly corner person to person formal remittances.

Right now anyone sending money to Zimbabwe via popular remittances outfits like Moneygram, WorldRemit, Western Union, MTN Money and now Mukuru has the option to send it directly to the recipient’s wallet, an arrangement that has undisputed value for the sender and recipient.

Econet’s extensive agent network (26,000 and counting), the popularity of its EcoCash platform (6 million users+) and its willingness to partner with any and every remittances outfit can only point to more partnerships in the future.

Signing up Mukuru is a major step towards its plans to have a major grip on formal remittances inflow, largely because of Mukuru’s strong presence in the South Africa-to-Zimbabwe remittances market.

This corridor has been identified as the most lucrative for remittances because of the huge contingent of Zimbabweans living in the neighbouring country.

However, it also brings into question the success of Econet’s own EcoCash Diaspora. It was launched in 2015 as Econet’s own effort at channeling funds from South Africa to Zimbabwe.

While Econet has been quick to notice the strengths of partnerships with traditional remittances companies with existing footprints and brand presence, it’s also heightening the value proposition of its own competitors.

Econet management has highlighted this as a strategy to extend options to its customers. However, that’s a bit difficult to accept without questioning how much of an impact it’s having on EcoCash’s very own remittances project.

In any case, EcoCash has consolidated its place in formal diaspora inflows. What will be interesting to see though is how much all these partnerships are contributing to EcoCash and Econet as a whole.