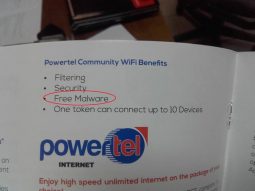 Here’s something that you might have noticed floating around on social media in the past few days  – Zimbabwean internet provider Powertel has listed malware as one of the benefits of its Powertel Community Wifi service.

Malware (malicious software) which is basically all forms of nasty software that include viruses, worms, and ransomware is in no way beneficial to anyone using a machine or accessing the internet.

In fact, all service providers and their users have to guard against it religiously.

Which is why it’s a bit puzzling that this sort of mistake slipped through the cracks and ended up on Powertel’s promotional material.

When we reached out to the Powertel team to find out how such a glaring error had been overlooked they chalked it up to a “genuine design and copy mistake” that had affected a single batch of fliers.

According to the Powertel team, they have since recalled the faulty copies.