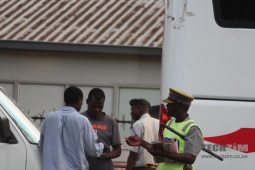 When it comes to organisations that uphold traffic safety or inspire confidence in the law most motorists in Zimbabwe won’t be quick to mention the Zimbabwe Republic Police (ZRP).

That’s probably because they are a major source of pain and frustration for motorists through their countless roadblocks which are also hives of corruption.

To counter this, the Road Users Association, an association which was recently formed to address the excessive police roadblocks deployment on Zimbabwean roads has decided to use a simple online tool to keep an eye on these roadblocks.

The association has created a Google Form that can be used by motorists to enter traffic fine information.

This is meant to create a database which can be used as a record of any irregularities in traffic fines through the extortion of motorists.

This form essentially captures all the important info on the traffic fine such as the name of the officer, the offence, and the amount of money being collected.

It’s meant to expose the irregularities that have often been associated with the selective application of traffic laws.

According to the announcement of this form which was shared on Harare News’ Facebook page, this solution has been approved by lawyers as something that is legal.

RUA has opened up to questions or comments on this tool via its email address (roaduserszim@gmail.com) or on Facebook.

Through groups like RUA, the Zimbabwean traffic police have been called out for practices that include an excessive deployment of roadblocks as well as the alleged abuse of authority which is often a ploy to instigate bribery.

A tool like this Google Form is expected to go a long way in recording the frequency of such cases while providing a record of just how much is being shored up through traffic fines.

A case from improvement?

Though there hasn’t been any mention from RUA on how this idea might be iterated, it could also benefit from the use of other common solutions like a hotline WhatsApp number which can receive photos of fines as well as other social media platforms like Facebook.

Then again, those are ideas for the future. For now, it’s good to know that there’s some effort to monitor ZRP traffic.

11 thoughts on “Fed up with cops, Zimbabwean road users have adopted this Google tool to monitor roadblock corruption”