Traffic to Econet’s classifieds property, Ownai had a drastic increase in traffic in the month of August. Some 180% increase from 95k to 270k visits a month. This is important and potentially a big deal for the company as it has in past failed to get any meaningful traction on its first internet venture.

In March this year we wrote that the site was actually declining in traffic, to figures as low as 15k visitors a month. It was very low traffic for a 5 months old website with the amount of resource behind it the size Econet’s.

These new figures however show that Econet may have finally found the growth formula. Hopefully organically. There’s no telling however what they did right in August to get that amount of growth. 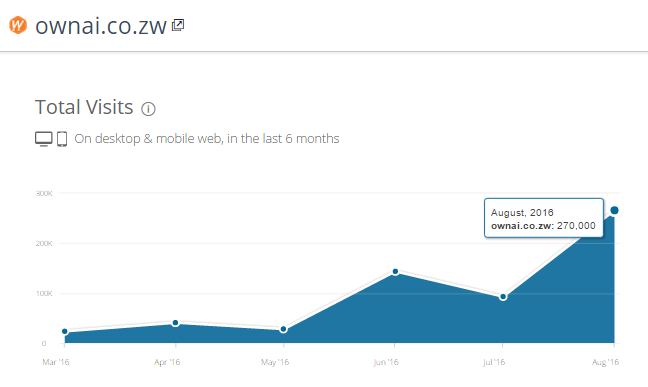 I say hopefully it’s organic but you know that’s vain hope. 180% growth in a month would be anything but organic. Well unless ofcourse everything has changed and we’ll be seeing such crazy growth onwards month on month. But seeing I’m in Zimbabwe and haven’t heard a single satisfied Ownai customers speaking about the service, I’m figuring not much has changed on the organic side of things.

To be clear, I’m not saying Ownai has no satisfied customers. I’m sure they’d have canned the project already if they didn’t have at least some. I just haven’t encountered any amoung the people I interact with – and mine is an unimpressively small circle so I could be wrong about it.

Even though we write all day about traffic figures (because that’s all we can see from outside), the customer figures are actually more significant for classifieds platforms. That is the number of listings that result in a sale and hopefully a satisfied seller and buyer on either end. These are the figures that will result in organic growth driven by the word of mouth of those users.

On the issue of everyday people saying “I bought this on Ownai” or, “Iwe, you could just sell that on Ownai!”, it is interesting to consider whether people say that about any classifieds website in Zimbabwe. I don’t think they do.

I’ll share more on this in a separate article, hopefully later today. For now, it’s just fascinating what new opportunity is there and how tappable it is for the two contenders – that is Ownai and Classifieds.co.zw – as well as any new local players that may seize it like Tengesa attempted to some several years ago. It might even be some fast growing global player like OfferUp that takes it up.

9 thoughts on “Econet’s Ownai increases traffic by almost 200% in a month. Will they win c2c classifieds?”