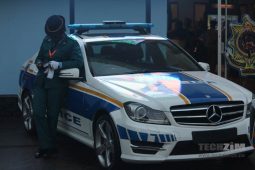 It has been reported that the Zimbabwe Republic Police (ZRP) has bought traffic enforcement vehicles, buses and utility vehicles worth US$1 million.This is supposed to help maintain law and order in the country.

The Minister of Home Affairs, Dr Chombo reportedly highlighted the importance of these vehicles in enforcing good behaviour from motorists while the Police Commissioner General, Augustine Chihuri, has cited the force’s visibility created by such investments as a necessary part of crime prevention.

There’s no doubt that there’s a void that these vehicles will fill. Our police force is short of resources in a lot of areas so there’s reason to appreciate efforts that will equip these guys with what they need to do their jobs.

At the same time, there’s another scourge that ZRP needs to deal with just as enthusiastically – corruption.

If the ZRP can put up $1 million for new cop cars there surely can be an investment made towards resources that still help the police do their jobs while addressing other faults in the system.

Perhaps Point of Sale (POS) devices for the e-payments of traffic fines (local bankers have put the cost of reliable ones about $500) or even body cams (body worn cameras. They cost $600 plus $1,200 for monitoring every year ) for traffic officers that can monitor ZRP activity.

Or better yet a system overhaul that digitises how all cases are processed by the police.

One thing is certain, these investments would be appreciated by motorists and every other citizen who’s witnessed first-hand the weaknesses in the law enforcement system.

Then again, these would probably be considered as overambitious investments that “don’t address corruption” which is probably “not that big a problem” for the police. We’d need to get the police on social media first before we leap to digital monitoring.

3 thoughts on “US$1 million on ZRP cars? How about tackling corruption with POS terminals & body cams instead”