10ngah.com has come up with a win-win formula to get rid of its old stock and allow people the opportunity to purchase products through its rent-to-buy promotion.

We took a look at its website and found a few products under the rent-to-own section. There was a used iPhone 5, refurbished iPhone 5C and 2 new iPhone 4S. However, when we looked at their Facebook Page it seems the promotion extends to all their products.

From what we gathered, you pay half-down (50% of the purchase price) and have two months to pay the balance of payment at 0% interest. So, if say you wanted one of the iPhone 4S  you pay $60 dollars, receive the phone, then pay $30 dollars for two months while you are using the device, with all payments done via Standard Chartered Bank. Free delivery via Fed Ex is included. 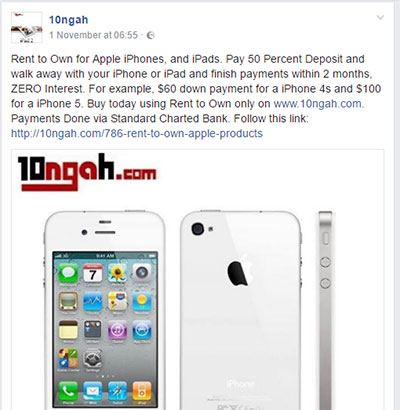 However, our excitment quickly died down as we failed to get in touch with 10ngah.com to get information on the promotion and how it really works. We emailed, sent a facebook message and it seems like they pulled down their Twitter account. They also do not offer a landline/mobile phone number to contact for inquiries.

Interestingly, we wrote an article back in September this year on business social media etiquette which we had a screenshot of an unfavorable conversation between 10ngah and a disgruntled client on Twitter which may/may not have contributed to them pulling down their account. 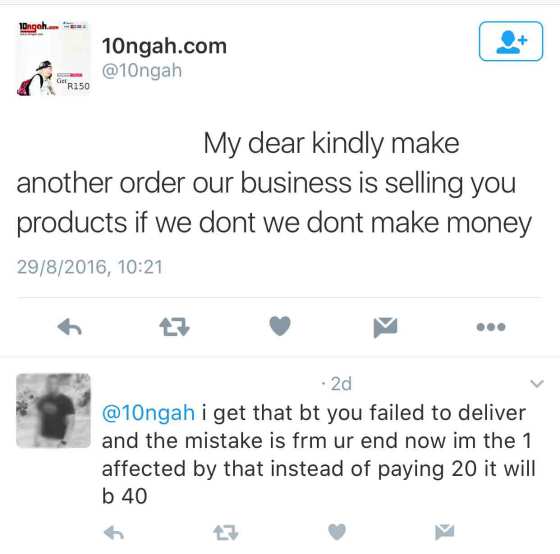 It was a big let down not being able to get in touch with them and if we were potential customers we would have long given up on the deal. We looked through some of their conversations on Facebook and their response time was sometimes up to a whole day.

Their last responses to clients were after 5hr and 17 hr delays which in e-commerce is not ideal, especially for a Facebook Page with +75k likes? Best practice would be immediate to 5min response time for an “online” shop.

Without even trying to make a purchase we could already sense the frustration we would be walking into. It is not in any online businesses best interest to have customer complaints in almost every social media post. Communication is the cheapest form of flattery and 10ngah seems to not be concerned with it at all, making us wonder again if e-commerce is alive in Zimbabwe?

We once did a test on Econet’s EcoShopper which proved to be a disaster, we literally lost $20 as EcoCash failed to recover our money even though we transacted on their platform (forms were filled and calls made still nothing). That and the service not even known to the guys at National Foods who were meant to provide our products!

If you have been tried to transact with 10ngah.com or any other e-commerce/online shopping site in Zimbabwe please let us know what experience you had. So far we have been left rather frustrated with each interaction.

24 thoughts on “Excitement to Frustration, another Zimbabwean online shopping site fails to deliver, even before the order is made!”