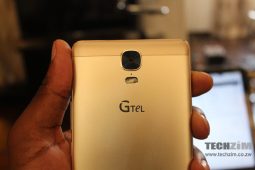 Okay so the name will surely need a bit of getting used to but if you were following the Gtel line of smartphones i’m sure you can adapt to the new version quite seamlessly.

This is the Gtel A7150 X4 and it’s a big, premium, beautiful slab of hardware with quite a few tricks underneath its metal and glass shell.

Without further ado may you please allow me to take you on a tour of the unboxing experience.

Unboxing the rather decent looking box reveals a collection of contents. 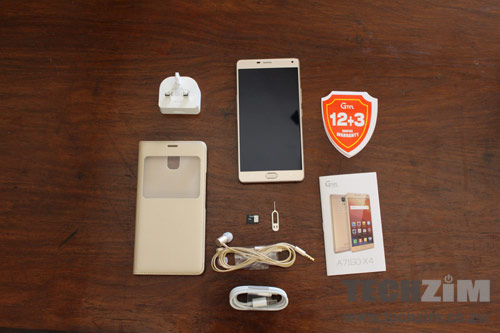 Now tell me that’s just the most accessories one can get out of the box anywhere! Only thing missing might be a tempered glass to safeguard that gorgeous panel. More on the panel in a moment.

The flip case and earphones possess the same dress code as the smartphone, (Gold in the case of our review unit).

The flip case is made from leather and feels pretty premium to the touch. There is some software magic that allows the window of the flipcase to do even more stuff.

Earphones also have a premium touch, with the drivers enclosed in a metal body. Same goes for the mic enclosure as well as the jack portion with this sandblasted metal finish matching that on the back of the phone.

As soon as you hold the smartphone in your hand you are greeted by its sheer size. It is a phablet with a 6 inch 1080p AMOLED display and this panel is covered by a gorgeous looking yet toughened Gorilla Glass curved at the edges creating a 2.5D effect. Main takeaway is it looks pretty high end.

Above this splendid display resides a subtle earpiece flanked by a proximity and ambient light sensor to its left, an LED notification light immediately to its right (only visible if it is flashing) and a 5MP camera to its far right. 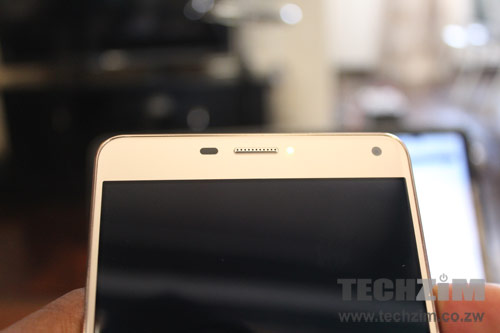 Below the display is a physical home button in the middle that doubles up as a Fingerprint Scanner or an alternative to the power button for unlocking the screen. It is very snappy taking just under a second to get you from a locked screen to the home screen. A point to note though. the fingerprint scanner is sensitive to orientation of a registered fingerprint. In several cases showing off this feature to my mates in awkward positions resulted in a failed login.

The home button is flanked by the two virtual navigation keys with the back key to the right and the recent apps key to the left.

The top of the device is bare, the left houses the Dual Sim tray, the right houses the Micro SD card tray, the volume rocker and the power button, the bottom has a USB Type-C v1.0 port with the primary mic and 3.5mm headphone jack (a true joy to have one) and lastly the back, it is a metal back of sandblasted texture which is pretty immune to fingerprints.

There are 2 strips, one on the top and one on the bottom which cover the antennae of the device. They are visible but are far from being an eyesore. 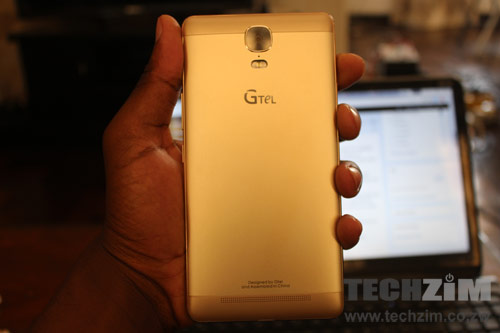 Also the back houses a 13MP camera with a tiny dot for the secondary noise cancellation microphone and below the mic is the single LED flash.

There are several ways to unlock the device. You can go traditional with the power/home button followed by a slide to unlock.

You can use a Double Tap to wake as well followed by a slide to unlock.

Using the fingerprint to unlock bypasses the tedious work of swiping to unlock and gets you to the important stuff ASAP. 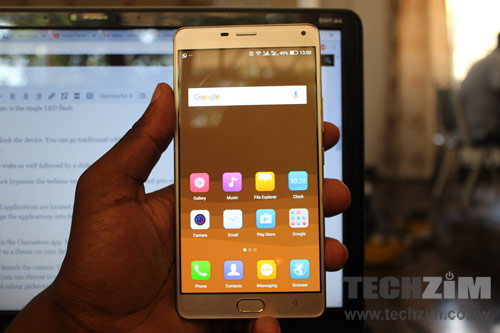 There is no app drawer so all applications are located on the home screen. If you prefer less clutter on your panel you can arrange the applications into folders saving you some quality, unobstructed wallpaper real estate.

Cool stuff about the Gtel UI is the Chameleon app. So you see a scenery with fabulous colours and you want to have that colour as a theme on your device. Worry not. 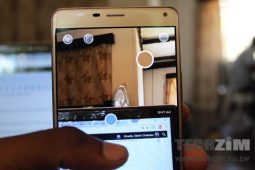 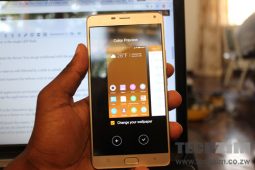 Swiping down from the top reveals a drop down curtain that blurs out the background and contains all of your notifications. Immediately you will notice there are no toggles in sight. That’s because there is a separate Pull up curtain that handles that. This pull up curtain can also be summoned at the lock screen if you need a flashlight or want to do a quick calculation. 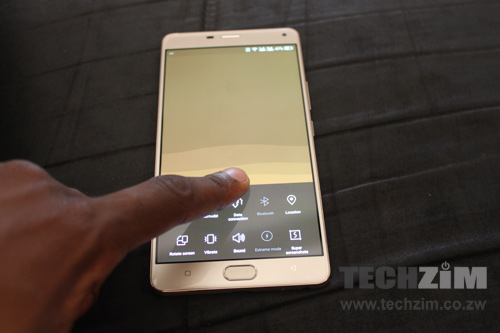 The user interface is buttery smooth and fluid throughout. No lag or stutter was experienced even when quickly flipping homescreens with a live wallpaper.

The primary camera is a 13MP sensor capable of capturing 1080p videos @ 25 Frames per second. Frame rates do fall when shooting video in low light environments such as indoors or at night which can be a bother.

Camera also has a Professional mode for the budding photographer including toggles for focus, shutter speed, iso, and exposure.

It also has a 5MP selfie camera with a healthy shipment of beauty enhancement tools for that perfect shot.

Audio quality is good through the bundled headset but the volume levels are rather on the low side. Turn on DTS though and the amount of bang will make sure you stay really awake.

The music player is very colourful and takes advantage of the rich, punchy colours that the display pumps out. The loudspeaker is quite good with volume level reaching up to 75 decibels and in this regard the DTS audio shines providing a nice balanced sound with very little distortion.

The Gtel is a dual sim device capable of dual 4G connectivity. This is a rarity amongst dual sim devices.  It also extends to CDMA that means you can have a Powertel or Africom line in the same phone that has your Econet, Telecel and Netone line and bluetooth 4.0. Reception is really good with clear sound through the most part of a telephone conversation.

Interestingly though, the Sim 2 slot could not detect an Econet line but throwing it in the Sim 1 slot solved the problem.

The battery is an insane 5020 mAh in capacity and Gtel claims it will go for 24Hrs of continuous video playback. I had it for a spin, took it off the charger at 6am with the battery brimming with juice and subjected it to heavy usage that includes photo and video shooting, music playback, video playback, mobile gaming, internet browsing and video streaming (facebook and youtube) and even a couple of benchmark testing. Also a point to note is that during the whole testing process all power saving features were off and display brightness was locked at maximum.

The Gtel pulled off a 40% battery depletion after an hour each of video streaming, video recording and gaming. This can be owed to a combination of a power efficient AMOLED display, a 1080p display and an efficient Octa Core 1.3 GHz CPU. This is a completely artificial test which allows us to provide a uniform test environment for all of our devices for purposes of comparison.

Ticking inside the A7150 X4’s shell is a 1.3 GHz Octa core Mediatek MT6753T CPU backed up by a Mali-T720 GPU giving us that buttery smooth user experience. Again, zero lag when abusing the UI with even the most unnecessary scrolls of the home screens. Animations remained smooth and fluid and the touch panel is pretty responsive as well as sensitive.

Partly I feel it is the way they have skinned the user interface and made it simpler with less bloatware. Don’t get me wrong. It might be a skinned down version but its clean aesthetics and familiar layout, (with the exception of the pull up toggle curtain), it is the most refreshing UI I have seen from Gtel.

Putting the gtel through its paces in Antutu 6 it managed a respectable score of 38744 points. 3D gaming performance and CPU performance is middle end but this is with reference to the most elite devices available out there. However in the real world under normal everyday usage the Gtel can perform hiccup free.

Let’s bring in the spec sheet.

Now for the easter eggs. One can enable knuckle gestures which allow you to launch an application without even unlocking your device.

The flip case also does a few things other than covering that brilliant panel.

+ Vivid big 6 inch display is a complete joy for viewing photo and video.

+ Strengthened curved glass not only beautifies but gives a premium look.

+ Fingerprint Scanner is pretty accurate allows up to 5 fingers to be set up.

+ Clean, simple, elegant user interface with some nice additions (chameleon app and gesture launching of applications from a locked screen).

+ Pretty good audio output with the bundled headset as well as the loudspeaker.

+ Stellar battery life can breeze through a whole day of heavy usage with extra juice to spare.

– Camera could improve when it comes to dynamic range and low light shooting.

– Pull up toggle curtain needs a bit of getting used to and can be annoyingly launched when tapping the spacebar whilst typing.

– It is a heavy phone weighing in at 204 grams, which is the price to pay for a 5020 mAh battery but you will feel when handling it.

-Price of $499 is a really premium asking price.

The smartphone will start retailing from Gtel shops starting November 21.

A reader recently commented in a TechZim group that “Gtel wants to be the iPhone of Zimbabwe.” That’s a pretty bold claim and Gtel might not be there yet, but from the looks of things, they surely are on the right track. Keep on the lookout for a video review!