This past Sunday I saw an advert by Nhaka TV in the newspaper. Nhaka TV is a internet Video on Demand (VOD) streaming service by Africom and some unnamed partners, that is launching. The ad was an advertorial, and a half page logo. I mention this detail to show that the company has began to spend on marketing and that this placement must have cost them a bit of money.

When a company starts spending on advertising it means they’re ready with a product and can now be officially considered part of the competition. In Nhaka TV’s case, that race is to become an alternative to global and regional TV content services like DStv, Netflix, Showmax, Kwese TV, IrokoTV and so on.

Unfortunately however, the company seems not ready with a product, which makes one wonder why they’re talking about something that’s not quite ready. And in talking about it Nhaka used the ad to say lots things about how this was the great deal without saying exactly what the product is and how one can sign up.

Take this statement in the intro for example:

Leading converged communication  service provider, Africom, has teamed up with other players in “bringing everyone together” to push “mbiri yedu” and is calling on citizens to go “tell someone” about “Nhaka” which comes to enable everyone to “connect to success”.

Nhaka is the first myriad of technologies expected to come as the Ministry of ICT continues to promote infrastructure consolidation.

Where the company was supposed to just say what they bring to the table in terms of great content and convenience to customers, they decided to talk about the behind the scenes arrangements of the product. But even then, they seemed not to want to disclose in simple direct words what all these partners are bringing and why this would make a great product.

This is the internet; the quality of the product and the shows on the streaming service matter more than PR pieces in the press because ultimately, subscriptions will be collected from the people who, individually, see value in the product.

Who has 4G and unlimited data?

In the ad, there’s mention of Transmedia as a partner but nothing about how this is key for the customer. Only later do they mention that viewers will need “4G or unlimited high speed broadband” to enjoy Nhaka, which Transmedia doesn’t provide. 4G and unlimited internet is afforded by a small section of the population in Zimbabwe and on the continent. This was an opportunity to say just how this won’t be a problem for their customers.

Nhaka however mentions a key partner in the project – ZBC. The government owned broadcaster has some unique content from the “TV drama” days of Mukadota and Paraffin so having them as a partner means access to this classic content. Content is a key issue for any TV service. I’m not sure though just how much content ZBC has and if it would sustain continuous subscriptions.

A big piece of ongoing new content is the ZBC News – essentially a tool for Zimbabwe’s ruling party (That is whatever faction owns ZBC) & government to announce policy and propaganda. I mention this because it’s hard to tell how much of the content, including the news, is actually attractive to Zimbabwe’s young demographic. I don’t know many people that would pay $8 (that’s the monthly subscription price by the way) a month to watch such content.

The Nhaka TV apps for Windows and Android are already available for download, and so I signed up for an account and sampled the desktop app. The first thing I noticed was that there are no shows on Nhaka TV yet.

I don’t understand why they’d spend money on ads and ask people to download the app, yet no single show has been uploaded. 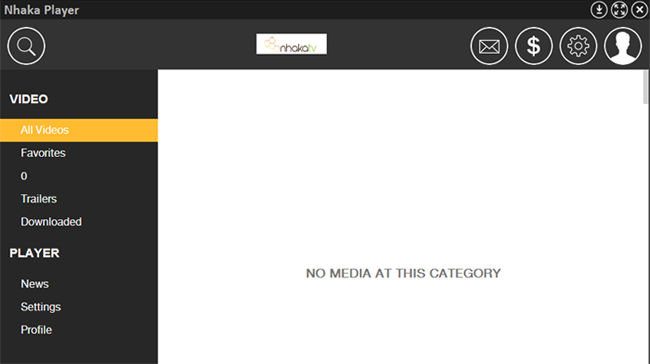 I’m doubtful that Nhaka understands just how much content it takes to make the $8 a month worth it. I don’t think all the ZBC content available is worth this price.

In Zimbabwe alone, Nhaka TV would need to invest a lot of money to ignite content creation to healthy levels that can feed Zimbabweans and Africans hungry for such content. To be fair, this is not just a Nhaka TV problem; it’s an industry one. There’s just not enough content being created and Nhaka is in the unfortunate position of entering the market at the fledgling stage when there’s a lot of work needed to create an industry.

Film is just not profitable in a big way yet in Zimbabwe, worse so VOD itself as a service. A lot of things are yet to be figured out. It is much unlike Nigeria and South Africa where, when IrokoTV and Showmax introduced VOD respectively, there was already a sizeable and growing local film (on DVD) industry. In Zimbabwe, good shows are probably in the 10s, at best. In these other countries, they are in the thousands.

Nhaka TV’s advantage ofcourse maybe that the ZBC deals means they’ll tap into some government money set aside as part of the TV digitisation content budget. Still, I suspect ZBC and the government underestimate just how much money and championing of an industry this will take.

It’s not just Nhaka. Kwese TV too, which launched several months ago, needs to play a big role in igniting the creation of content. That’s where they should be spending their money, instead of their current push to bring American & European sports content to African screens. The internet means content creators in America and Europe don’t need anymore to rely on the distribution services of companies like Kwese and DStv.

Local content is the big differentiator when a consumer compares Nhaka to Netflix ,or Showmax. New VOD companies like Nhaka and Kwese will therefore need tens of millions and a deliberate push to have great local content created at scale. That is the big problem and nothing about Nhaka’s current moves suggests they understand this yet.

Because I couldn’t get the clear message from Nhaka’s launch ad, I sent them some questions so they could fill in the gaps in the information. You can find the questions and their responses in this article here.

One thought on “Africom, ZBC and “some partners” launch TV Streaming service called Nhaka TV. Here’s what we think”