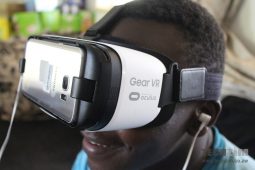 Okay so i’m in a commuter omnibus after a long day at work and i’m waiting for people to fill it up. I get my Virtual Reality headset out and put on a rollercoaster video and immerse myself in my own world for about 2 minutes. Taking them off saw me being asked by my fellow passenger, “what is that you are putting on?” to which I responded “it’s a virtual reality headset” and that resulted in a typical response “okay what you just said is greek to me” I then realised after this that I actually have no solid definition for virtual reality. So let me try and create one from what I understand from it.

So virtual reality is a digital simulation of an environment that an individual can experience and interact with given they have the gear that allows them to do so. This gear can be a headset like the one i’m using or gloves fitted with sensors or even a combination of both.

So VR pulls you out of the front row seat of the content you have and throws you right into the content. You don’t just view a picture, you experience the scene. You don’t just watch the video, you are in the middle of the action. The way it just immerses you into what you are watching is amazing.

To interact with your phone without removing it from the headset the Gear VR has a navigation touch pad, a back/return button and a navigation rocker (up and down only) located on the right side of the headset. It also has a micro USB jack on one of the 2 clamps that brace your hardware to the headset feeding input from the controls on the Gear VR to the smartphone and a dial to adjust the focus located on the top centre.

There is also a micro USB port at the bottom right side of the Gear VR where you can throw in your charger and this will keep the phone charged. It has belts that go round and over your head to secure the device on your face and it is quite comfortable too with some soft padding round the face of the headset.

Virtual reality makes use of the sensors available in your mobile device to synchronize your movements to the media you are viewing. So if you are seeing a 360 degree picture in VR then whenever you move your head in any direction, the sensors in our mobile device detect these movements and adjust the view of the scene giving you the feeling that you are at that place where the image was taken. The same applies if you are watching a 360 degree video which I recommend you try. You will regret not experiencing it sooner.

How do you get VR

Currently Samsung and HTC and Google are the only mainstream smartphone makers that have their own proprietary VR headsets Gear VR, Vive and Daydream respectively but a number of 3rd party companies are also making VR headsets including the relatively cheap Google Cardboard VR headset. Speaking of Google cardboard, they have their own applications available on the Google Play Store that is Cardboard for VR to access VR content and Cardboard Camera for you to capture your own 360 degree images (its basically a 360 degree panorama with upper and lower hemispheres blurred out).

The device we used for VR was a ZTE Axon Pro and it is not compatible with the Oculus powered Gear VR so the controls on the headset did not work on other devices (ZTE included) but in Google Cardboard settings you can find compatibility settings for Gear VR headset which worked flawlessly. Of all the VR apps I ran through Google Cardboard was the simplest to use and least demanding. It also has YouTube links to some neat VR videos.

For you to get the most immersive VR experience you have a few things you need to consider.

The Gear VR we have came with a Samsung Galaxy S7 Edge but unfortunately it did not allow us to download an Oculus App and to set up an Oculus account which meant we couldn’t exploit the full Gear VR functionality but thankfully that is where incompatibility issues ended. Hopefully if we get another Samsung that’s already set up we will most definitely update you. However if you have a device with its charging port (micro USB) dead centre at the bottom of the device then you should be able to watch some VR with no issues. At the office we tried the Moto G4 plus and the ZTE Axon Pro which both worked great.

You will not understand how good VR is till you try it yourself. If you haven’t it’s one of those those items you have to have on your bucket list.

If you have questions as to how competent your device is for VR just come through to the comments.

One thought on “Samsung Gear VR review. Get ready to be immersed.”