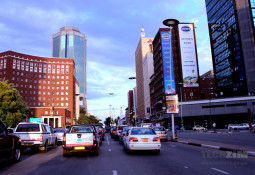 On the 2nd of December 2016, Yahya Jammeh, the leader of The Gambia for the past 22 years conceded defeat to opposition leader Adama Barrow in the country’s national elections.

While the most significant thing about the race for the presidency was Barrow’s victory and Jammeh’s concession, what was also notable was the way the Gambian government had switched off the internet a day before the elections.

This was in spite a multi-stakeholder campaign (#KeepItOn) and a petition signed by several organisations imploring the government to not do so out of respect for the freedom of expression. The internet blackout was effected in the country all the same under the guise of enforcing security.

#Internet disruption in #Gambia has dropped @akamai traffic to the country to zero over the last hour. (h/t @PsiphonInc) pic.twitter.com/MUe4NWvFss

The Gambia has become the latest African country to adopt the internet blackout tactic. While countries like Ghana have expressed plans to shut down social media during their elections, nations like Uganda, Mali, the DRC, Zambia and Gabon have all experienced some form of internet censorship that’s been triggered by political tension.

It’s clearly being viewed as a strategic way to quash expression or control communication in one way or the other. As Zimbabwe gears up for its own election season in 2018, it’s hard to not imagine that our government could explore the same strategy if “things” got out of hand.

After all, we have experienced some form of internet blackout that coincided with mass stay-aways that were inspired, to a large degree, by political rhetoric spread via social media (remember Tajamuka, Pastor Evan and #ThisFlag?).

To be clear, though, the Zimbabwean government denied causing any sort of service interruption at that time. However, this doesn’t take away the fact that as it stands Zimbabwe is a prime candidate for something of the sort.

The government is slowly stacking up the “means, motive and opportunity” to do so.

Means – Towards a unified gateway

In the second half of 2016, Zimbabwe’s draft ICT Policy which had been finalised in late 2015 after years of development was approved by the cabinet.

This document contained a section highlighting the government’s plans to have a unified gateway which is essentially a single exit and entry point for all international traffic. The gateway has been justified by the Minister of ICT as a way of monitoring revenue losses incurred through network operators’ undeclared or understated traffic.

As much as there is a reasonable justification for defending potential revenue for the national coffers, a unified gateway also presents the state with a single point where traffic to the country such as broadband can be halted.

Rather than commandeer all the internet providers to comply with a traffic shutdown directive there will be the option to do so from one strategic point.

There have been no indications that using this infrastructure is the government’s intention but it is something that will be within the State’s control should the need to do something like that ever arise.

Then there’s the law. From a legislative standpoint, most ICT law watchers will remember 2016 as the year that ICT legislation became a bit more mainstream. Most of the attention was on the draft Computer Crime and Cybercrime Bill which was in most cases sensationalised as the law to block social media.

Though it is still at the review stage what the bill will enable, once it becomes law, will be to classify all offences in line with misuse of electronic media as well as outlining what exactly will constitute as actionable offences.

If an online campaign or protest emerges as a threat to national security there will be justification for Zimbabwe’s Computer and Cybercrime Management Committee – arguably the most powerful outfit overseeing cybercrime – to institute actions to protect the country.

Such actions could be as simple as calling for an internet blackout for an extended period.

Motive – Just how much damage can a viral WhatsApp message cause?

As far as reasons to shut down the internet in Zimbabwe go, if concerns for national security are going to be cited all it takes is a viral message on an instant message platform or a post with an unclear message on a Facebook page.

During the brief period when internet activism spiked (yes, the #ThisFlag and #Tajamuka period again) messages from unknown sources encouraging violence that were shared on WhatsApp were referenced by the Ministry of ICT and the telecoms regulator, POTRAZ, as areas of concern and were viewed as grounds to “enforce” online communication regulation.

A strongly worded WhatsApp message sent at the wrong time could be enough motive to switch off all internet correspondence locally.

Social media has made it easy and almost natural to share opinions with the rest of the world. It’s intertwined with the urge that people have to share their thoughts and defend their positions.

At the same time the place where all this is happening – the internet – also offers an opportunity to do all this anonymously. This means that a faceless person or a covert group can share content that can be viewed as a threat to others.

Zimbabwean elections are set to be held in 2018 and as they draw close there is bound to be something that is shared, even under the guise of anonymity, which could have a huge impression on how State security is prioritised. That’s enough of an opportunity to make social media curfews and partial or complete internet shutdown a reality.

There’s a chance to act

For now, we can enjoy the fact that our government has been clear about its intention to not ban social media and has denied any sort of responsibility in previously experienced WhatsApp and internet shutdowns.

Out of an understanding of how history repeats itself and through a refusal to be naive when it comes to politics, there’s enough reason to believe that this might not always be the case.

The best way, other than promoting responsible internet use, is for everyone to play an active role in legislation around the internet and cyber-related issues.

There’s a real cost to internet shutdowns, a look at the millions of dollars lost in Ethiopia, DRC, Morocco or Uganda  shows how more than just the ability to tweet or snap is lost.

As such, lobbying for clearer cyber laws shouldn’t be for civic groups only. Right now, there is an opportunity to contribute to cyber legislation that’s related to potential internet blackouts. Every stakeholder ought to take part.

There should also be a willingness from citizens to understand how the things that they hold dear, such a chance to stay connected to the rest of the world through the power of the internet, can be easily labelled as privileges and not the rights that they have become.