1. The Reserve Bank has, in the past months, been inundated with complaints from the banking public regarding unsustainable bank charges on the backdrop of reduced cash and ATM withdrawal limits imposed by banks.

2. The Reserve Bank notes that while cash withdrawal limits have reduced significantly, cash withdrawal charges have remained the same. Resultantly, clients are paying much more to access less from the banks. It has also been noted that some banks have switched off their ATMs and customers are compelled to make cash withdrawals over the counter (OTC) at higher cost compared to ATM withdrawals.
3. As at 5 December 2016 ATM and OTC withdrawal charges were as shown in the table below: (see image below) 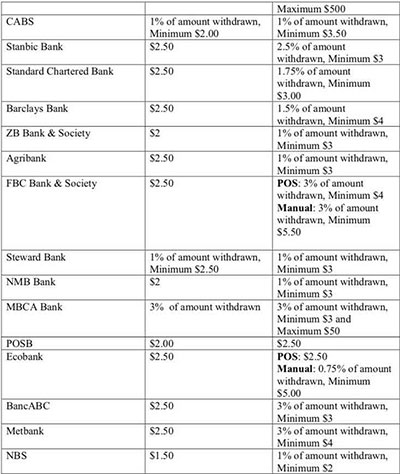 4. The prevailing exorbitant charges negate the efforts to build an inclusive financial system. Below is an analysis of the levels of the current charges which are considered unsustainably high: (see image below)

5. Assuming a withdrawal amount of $500, the table below illustrates the charges that will be levied and the net available depending on the cash withdrawal limit: (see image below)

WITHDRAWAL CHARGES
7. The Reserve Bank is cognizant of the cost of procuring and distributing cash as well as the need to adjust ICT systems in some institutions. Banking institutions should, however, re-examine cash withdrawal charges in order to offer affordable banking services consistent with the financial inclusion thrust.

8. In line with the current thrust to promote the usage of plastic money (ATM cards) and the fact that a number of banks are not dispensing cash through ATMs, a cash withdrawal charge of 1% and 1.25% of the amount withdrawn for ATM and over-the-counter, respectively will be applicable.

9. Accordingly, with immediate effect, all banking institutions are required to implement the revised cash withdrawal charges shown in the table below. (see table below)