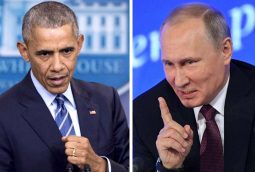 The United States has announced expanded sanctions on Russia for its interference in its 2016 presidential elections through cyberattacks that leaked emails from the Democratic party.

According to the New York Times, the sanctions will include the expulsion of 35 suspected Russian intelligence operatives from the United States and sanctions on Russia’s two leading intelligence services.

American intelligence agencies concluded that the G.R.U. a powerful Russian military intelligence unit ordered cyberattacks on the Democratic National Committee and other political organisations after it had received the go-ahead from the Russian administration, the Kremlin. The attacks gathered emails that were published to the benefit of winning candidate Donald Trump’s campaign.

Russia has denied any involvement in the cyberattacks and the Kremlin has already slammed the sanctions accusing the Obama administration of attempting to destroy diplomatic relations and to disrupt the foreign policy plans being set in place by President-Elect Donald Trump.

With cyberattacks playing a central role in the disruption of diplomatic relations and foreign affairs outcomes the case between the USA and Russia will likely highlight the need for increased investment in cybersecurity from all other governments around the world.