A group of Russian hackers under the name of “New World Hackers” claim to have taken down the CAF (Confederation of African Football) official website on Saturday in protest over Gabon’s Government led by “dictator” President Ali Bongo Ondimba, Gabon is currently hosting the Africa Cup of Nations (Afcon) tournament.

The hackers claim to have taken the site down for several hours on Saturday, according to a report by the Associated Press CAF spokesperson Junior Binyam confirmed the site was down but could not say whether there were unconnected technical problems with the website or if it had been intentionally targeted but they were working on the issue for two hours without success.

The hackers notified Associated Press of their hack stating that they shut down the website due to CAF “running the Africa Cup in a country where the dictator Ali Bongo is killing innocent people!”

The hackers claim to have taken the site down through a DDoS attack where multiple compromised systems, which are often infected with a Trojan (virus), are used to target a single system causing a Denial of Service (DoS) attack.

When Techzim tried to access the site out of curiosity we were greeted with a message written “checking your browser before accessing cafonline.com. The message was from CloudFlares DDoS protection service which is evidence that a DDoS attack did happen on the website. 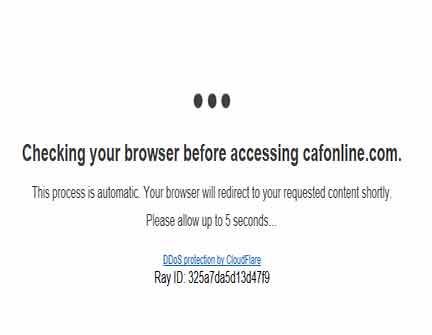 It is not the first time Gabon has made the news for internet related activities, in September 2016, Gabon imposed a 6 pm to 6 am internet curfew on all its citizens after initially shutting down the internet for a total of 104 hours (the longest internet shutdown since Libya went offline in 2011) after the announcement of its controversial presidential election results which saw Ali Bongo re-elected by a slim margin.