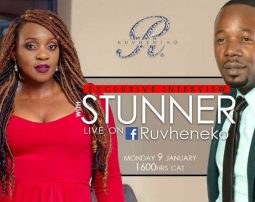 The Stunner and Olinda drama that grabbed the attention of every Zimbabwean on social media recently isn’t over yet and while it has just shone some light on the opportunity for content creation it’s also exposed another avenue for media.

Ruvheneko Parirenyatwa, the journalist and radio/TV personality will interview Stunner live on social media. Her platform of choice – Facebook Live, which coincidentally is the same platform that was used by Stunner’s wife to start all of this.

On the 9th of January 2017 at 4 pm Ruvheneko is set to have a one on one interview chat with the Hip Hop star something which by itself might seem like just another chat with a start tied up in something controversial.

However, it also shows how the internet continues to disrupt traditional “old school” media. Ruvheneko, who left local radio station ZiFM last year no longer needs a radio station to create discussion or engagement on a topic that’s been followed closely by tens of thousands of Zimbabweans.

Thanks to her brand name as an interviewer and media personality, all it takes for her to get people’s attention is a smartphone a good internet connection and a Facebook account.

The interview (which hopefully is the first of many) could generate the sort of traffic needed for her to even monetise her work, or build a new platform for talking to all sorts of personalities (in business, politics etc) helping her cut out any middlemen like radio or TV stations in sharing content.

The moral of the story – With the internet available to the whole world who needs a licence to reach millions of people with great content anyway?