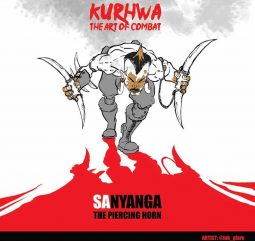 A couple of years ago Comexposed, Zimbabwe’s own comic book expo and rally point for the country’s growing animation and design industry was launched.

In addition to showcasing the work in this space, it also brought together some of the local talent working on Zimbabwean comic books, professional animation and some game development project work.

Now, in the latest Comexposed development, a small team of animators and developers who are part of the Comexposed community (Eugene Ramirez Mapondera, Dananayi Muwanigwa, Amanda Chaniwa, Pious Nyenyewa, Tinodiwa Zambe Makoni, Bill Masuku and Chengetai Machacha) are working on a Zimbabwean video game that’s set for beta launch on the 14th of April this year.

Called Kurhwa – “The Art of Combat”, it’s a free to play multiplayer combat game which has strong Zimbabwean references in terms of concept, and character development. Some of the concept art for Kurhwa which gives a glimpse of what some of the characters will look like has been shared on social media.

So far, the development team has been open to questions and inquiries and they are planning on making the beta version free so as to develop the full version with feedback from the Zimbabwean community.

According to Eugene Ramirez Mapondera, Comexposed co-founder and part of the Kurhwa development team, the beta version set for release in mid-April is a PC version and the plans are to have a mobile version ready by the end of the year when the full retail version is launched.

This is the first independent, commercial gaming project which the team has worked on – in the past, they have worked individually on corporate projects for other entities. By the looks of things, this will also be the first full-scale commercial video game project that’s launched by a Zimbabwean outfit with a Zimbabwean focus.

Mapondera highlighted that this was closely tied to the Comexposed efforts, with the objective of also showcasing locally developed video games when highlighting other local multimedia works like the comic books. he says,

We are hoping to have a situation where the gaming aspect of Comexposed actually uses locally made games and not foreign games. That way we push our mandate forward. The same way we developed a local comic book community or industry, we want to establish a local game development industry as well. The same way we kick started it with comic books by creating comic art, we needed to do the same with video games. We needed to roll up our sleeves and make it.

The success of such an initiative would be a confidence boost for local creative talent and tech entrepreneurship, especially with a Zimbabwean narrative tied to the content that’s being delivered.

Zimbabwe’s participation in the $100 Billion global gaming industry will also be worth following especially in an environment where opportunities aren’t as clear for most young people.