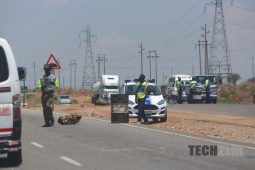 The Zimbabwe Republic Police (ZRP) has introduced point of sale (POS) machines at all traffic police stations in Zimbabwe in a bid to ensure that the payment of fines and penalties done so on time.

In a report on ZBC, the ZRP’s national spokesperson Senior Assistant Commissioner Charity Charamba noted how the adoption of POS machines was a result of a need for ZRP to adopt plastic money alternatives.

Zimbabwe is experiencing a severe cash crisis which has forced all entities that deal with payments on a day to day basis to adopt alternatives such as plastic money and mobile money which several Zimbabweans now rely on.

Charamba, who highlighted how the POS facilities will “help motorists”, also mentioned that the next stage in the ZRP’s e-money roll out would be the introduction of POS machines at roadblocks to cater for spot fines.

Despite a court ruling that deemed it illegal to detain motorists for not paying spot fines, there has been an increase in roadblocks and spot fines with motorists voicing their concerns on social media. Some of the suggested reasons for this increase in fines is the police’s reliance on traffic penalties to raise revenue.

The introduction of POS machines will likely embolden traffic police officers in their efforts to collect fines since the excuse of not having cash can be dismissed.

8 thoughts on “ZRP introduces swipe machines at police stations to handle fine payments, roadblocks are next”