For most people in Zimbabwe, the economy hasn’t been kind to them with its limited opportunities and the realities of unemployment hitting them in the face. Some people have skills but they just don’t know how to sell them.

Which is where freelancing comes in, providing one way to make good use of whatever knowledge and acumen someone has through part-time jobs while providing some exposure to unemployed people with limited experience. In certain fields like animation and designing it’s already a common way to grow one’s portfolio.

A local startup called Shanda (which means “work” in Shona) is trying to extend this to all types of jobs. It has developed an online freelance platform – www.shanda.co.zw with the sole effort of linking skilled workers together with entities that need some tasks taken care of. Shanda is trying to establish itself as Zimbabwe’s primary freelance marketplace.

How does Shanda work? 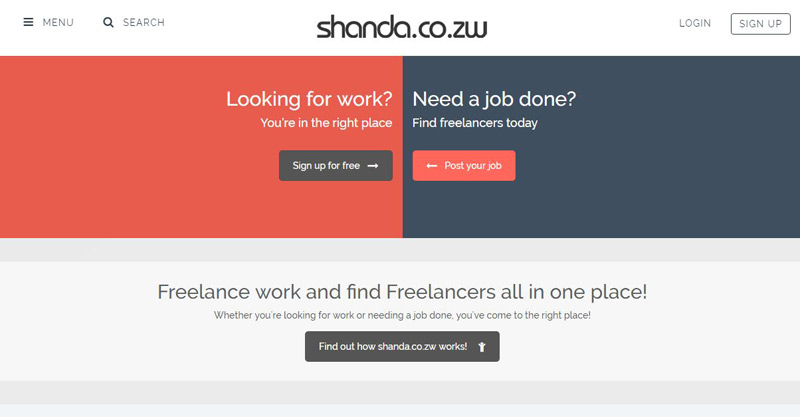 The Shanda platform works in a lot of ways like other online freelance or e-lance sites like Fiverr, People Per Hour or Econet’s own Technites.

Anyone looking for part-time work that matches their skills or anyone or any organisation that needs to get a job done and wants to get freelancers to fill the skills gap logs on to the site and registers either as a freelancer or posts a job.

When you sign up to work you are expected to complete a profile which will be used to list on the Shanda Freelancers list. You then watch for jobs that pop up which match your skills which you then bid for. You can bid for 2 jobs for free and after this, you can buy a $1.99 monthly subscription which gives you access to an unlimited number of job bids.

Anyone signed up to hire can post one job for free and get freelancers to bid for the job. This can be followed by a $1.99 post for a “featured job” which will be featured on the Shanda website, social media pages and email newsletters.

According to Joel Moodley, the guy who developed Shanda, the project came through his own observation of people looking for referrals for skilled people for certain jobs plus his own experience as a freelance developer. He says,

Having worked as a freelance web developer and graphic designer for the greater part of my career I’ve always looked for ways to find work out of my general social circles. A few years back I managed to secure a few jobs on the international site freelancer.com and it was a great opportunity.

Last year I noticed a huge increase of people on Facebook of people asking for recommendations on who can provide a good plumber or electrician or graphic designer and I thought it would be great to have a central place where people can come to look for and provide a wide variety of services and the freelancer.com model came to mind. Starting work on this project in November, I threw out the first two prototypes as they were not satisfactory, but by the 2nd of January I felt I had a product that was ready for Zimbabwe!

So far Shanda has attracted a little over 300 registered users and it’s starting to gain some traction on social media platforms like Facebook.

A few jobs have been posted and “Bid” for although no actual hires have been made yet. Joel says the objective for Shanda now is to start marketing the site to people who need services or jobs carried out which is expected to increase the job transactions.

The team (right now it’s only Joel and his wife Rikki) conceived, developed and planned out Shanda but also got help from friends and family that helped through Beta testing and with opinions, constructive criticism and advice.

Its focus right now is growth in terms of signups and more importantly the job conversions for freelancers and anyone hiring.

One thought on “Shanda, a local startup is trying to address Zimbabwe’s unemployment with its online freelance platform”