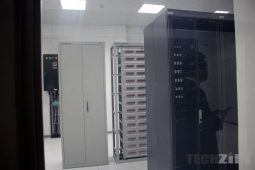 Yesterday TelOne launched their new data centre, amidst much pomp and funfair. Techzim covered the event and besides witnessing Plaxedes Wenyika serenading the crowd, a clearer insight to what POTRAZ are implementing in regards to the National Internet eXchange Point (IXP) was established.

Techzim are yet to establish new data surrounding the establishment of the IXP, however TelOne have been forging ahead in-line with ‘ZimAsset’ resulting in the National Broadband Project. The ‘mega deal’ that was signed that availed a $98m loan from China Exim bank is where the funds were drawn down.

Enough of the background to the launch and the data centre, herewith are some facts that were learnt and hopefully should you have any questions regarding the data centre they’d be answered below or in the comments if you will: