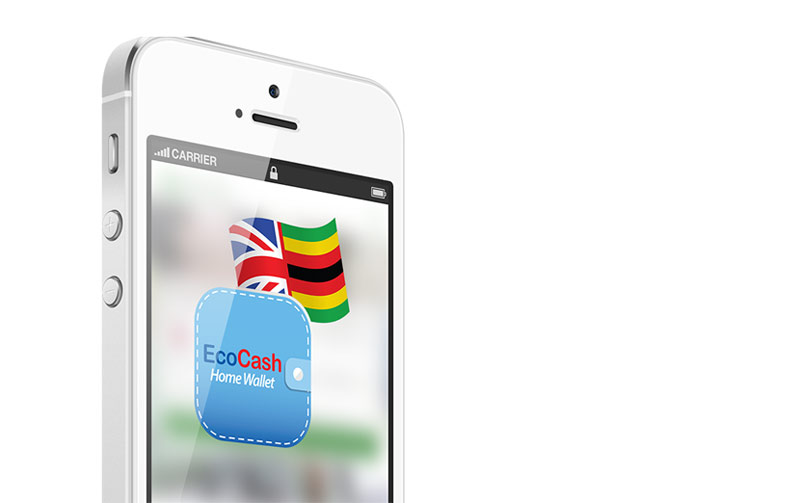 Techzim was recently alerted to the launch of Ecocash’s Home Wallet, a service that essentially allows those in the diaspora to access and enjoy local Ecocash services, acting as if they are here in Zimbabwe.

Their announcement states that those in the UK would be able to register for the service on the Cassava Remit website, the remittances arm of Econet Global, after which they can then download the Ecocash app (iPhone and Android versions available) and start transacting as if they are in Zimbabwe.

I tried to download and register for the service, in order to give the best review about this, but unfortunately as I’m resident in Zimbabwe, their KYC needed certain documents that showed that I was resident in the mighty ‘Great Britain’ and so my thoughts are just about what I think the possibilities of such a service can do. I hasten to add that this may not be a bad thing (will look forward to reading the comments for the thoughts of those in the UK).

Is this a big deal?

Yeah, the response to that is relative. It really depends on what you’d want to use the service for. The aim and intention of this service (me thinks) is so that someone in the UK can be able to pay for bills and/or services back home as opposed to sending money and the recipient not going on to pay for what they were sent the money for.

I don’t think I’m the only one who thinks that this is a huge problem.

Why I think this is great, is because of the ability for those in the diaspora to pay direct, without any ‘middleman’.

The list of services available for payment right now through Ecocash can be found on their website here, though there are a host of ‘merchants’ who are accepting payments as well. These would be services that those in the UK can pay directly for, thus cutting out the cost of transferring/remitting the funds as well as withdrawing.

Where the wheels come off for me is the discrepancy in the exchange rate. Right now the US dollar is trading at 1:1 with the bond note, bond notes being the legally accepted tender in Zimbabwe. Should this rate ever change and per chance US$1 starts to get $20 bond notes, then a bill that would be $100 in Zimbabwe can be paid for using us$5 (or its equivalent).

Cassava Remit, who are a registered money transfer agency will need to play by the book and any transactions they’d do will have to be at the official exchange rate and hence someone in the UK would not be able to enjoy that disparity, if it ever comes to that.

When someone sends money from their UK Ecocash app ideally I’d want it to go to my Ecocash Rand account, in that there are a number of agents who are now processing Rand and I’d stand a better chance at getting my hands on them than US$ or bond notes.

Have you downloaded and registered for the service? What are your thoughts thus far?

Here’s there press release about the service:

UK diaspora customers will now have access to the Ecocash wallet as if they were in Zimbabwe and enjoy the ability to remit funds and pay for goods and services using the newly launched Ecocash Home Wallet app.

Econet Group’s fintech subsidiary, Cassava Connect (formerly Chitoro), unveiled the product in London on Thursday, calling it ‘a first in the world of remittances between the UK and Zimbabwe’. Cassava is the company through which all EcoCash mobile money services are managed across Africa.

For the first time ever, Zimbabweans in the diaspora are now able to take direct control of how the money they remit to Zimbabwe is used. They can sign up for the EcoCash mobile money service via the Ecocash Home Wallet app, and link it to their UK mobile number.

The app is available for download on the Google Play Store and Apple store. Once registered, a user in the UK will be able to top up their Home Wallet through a debit or credit card or bank transfer, which will allow them to send money home and perform all other transactions available on EcoCash in Zimbabwe such as pay bills, pay merchants, or buy airtime.

Haxton Rose, Managing Director of Cassava Remit UK, described the new service as “a response to long standing calls by the diaspora community for a transaction offering that provides speed, comfort, control, and security of funds remitted back home.”

He said the launch comes with a three month zero fees offer for top-ups to the wallet, while all in-wallet transactions remain free after topping the wallet.

Natalie Jabangwe-Morris, General Manager for EcoCash Zimbabwe, said: “Gone are the days of having to queue at a high street shop to send money home, wait for several days for the money transfer to go through, and then having to rely on someone to handle other transactions in Zimbabwe on your behalf such as paying for school fees or any other projects back home. Regrettably, in such scenarios, we have heard of many instances where the money ends up being misappropriated.

This is where the EcoCash Home Wallet comes in handy as the customer not only gets access to a remittance capability, but also gets direct control over how the funds will be used downstream.”

Cassava has so far excelled in developing and introducing such innovations across the markets in which it operates, which has in turn enhanced the equity of the EcoCash brand as seen at the just ended Mobile World Congress in Barcelona, Spain, where EcoCash was recognised as the Best Mobile Money Solution in the World for 2017.

To sign up for the Ecocash Home Wallet service, visit www.cassavaconnect.com.