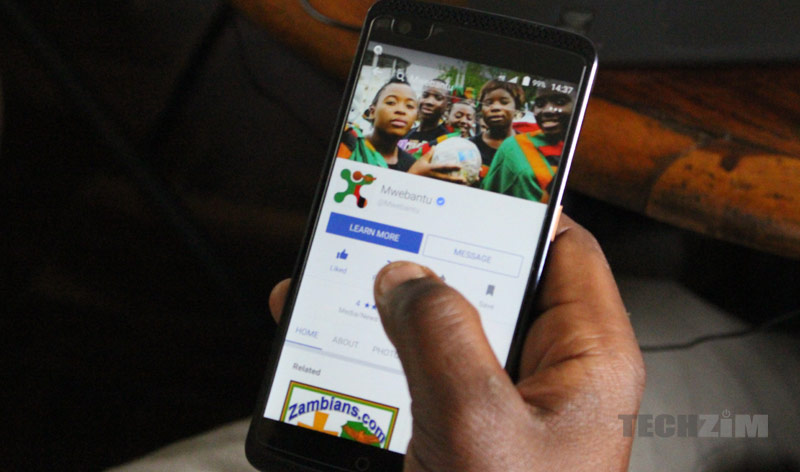 A popular general news publication in Zambia, Mwebantu, shut down its website in November 2016 to experiment with publishing exclusively on social media. The publication now posts its news on Facebook and Twitter only. Websites, Mwebantu told us, are like landlines in terms of the disruption by social media that they have suffered.

With a following of about 690,000 on Facebook and 18,000 on Twitter, Mwebantu reaches a significant number of people more than its rivals Zambian Watchdog and the now shut down Post.

We contacted Mwebantu to get some insights on their strategy and they told us they just followed the audience and since people are mostly on Facebook, they went there.

“We had a website.. and used to publish from Web to Facebook. Websites are becoming like landlines in Zambia. Traffic is high on social media especially Facebook…. Zambia is a Facebook country..So we take the news where our audience is.” explained a person at Mwebantu who said they are the founder but wouldn’t give their name. (a bit more about that later).

The next question becomes that of business model, since most websites rely on banners and sponsored articles. The Mwebantu founder says their revenue model is to use their large audience to attract advertisers and post the adverts directly on social media like regular posts. Adverts like this one and this one.

Zambia, according to Mwebantu, has about 800 thousand active Facebook users, and this is what attracted them to the platform. The founder says their experiment is so showing positive results as Facebook is now Zambia’s leading news platform.

Zambia’s affinity with Facebook is not without explanation. Like Zimbabwe, the country’s mobile operators offer social media bundles to their customers. The largest operators in the country, MTN and Airtel, both have what are called “Social Bundles”. If you’re an Airtel Zambia customer for example, you can buy a Facebook only bundle.

This means people will buy whatever social media platform has the most customers (Facebook in Zambia’s case) and use it for their internet needs: mostly communication, entertainment (music videos, comedy etc…) and news.

Note on the anonymity
So the Mwebantu founder wouldn’t give us us his name. We asked friends in Zambia what the issue is and we were told Mwebantu is widely considered a project sponsored by the Patriotic Front political party. The party is the equivalent of Zanu-PF in Zimbabwe, but maybe more progressive – I don’t know.

Anyway, many consider Mwebantu the party’s project and that it was created to counter what used to be big internet publications before it came along. The political party is accused of engineering the shutting down on Post (ok, so maybe as small minded as Zanu-PF – I don’t know), which apparently used to be a big publication before Mwebantu took centre stage.

We asked the Mwebantu founder about all this and she/he wouldn’t. “Let your contacts provide you with information to their allegations…we dnt know what you will do with this information or whom you are,” he said.

Baggage aside, no doubt Mwebantu has seen the reality on the ground and has understood the social media era better than most publications and is reengineering its business accordingly.