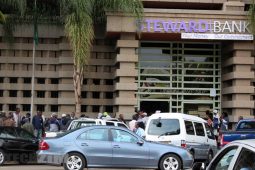 The past several months have been quite bad for some Steward Bank customers. Some of the bank’s technology platforms have been going offline without explanation. Some customers have complained that their account balances in the system are often wrong. Some have complained that failed transfers somehow still reduce account balances, and that such errors go unreversed for a long time. And there’s the issue of unexplained bank charges.

The bank hasn’t said exactly what the problem is and why only them and not other banks are being affected by such problems. They have only offered the template “we’re sorry and our people are working on it” response.

Observing from outside however, many have concluded the bank’s banking technology platform just can’t handle the huge amount of customers they have attracted. There are also suggestions the bank may have not followed best practice in the implementation of some technology systems.

Today, the bank has released a statement apologising the for all this and promising that they are fixing the problems this weekend by upgrading the bank system.

The Bank’s system has been intermittent and unstable in the past few months. This has resulted in a number of our customers being inconvenienced when transacting on some of our platforms. To address these challenges, the bank has made significant investment in a robust ICT infrastructure. As a consequence, we will be conducting a system upgrade and maintenance from 1800 hours, Saturday 25the of March to 0600hrs, Sunday, 26th of March 2017. During this period, limited service will be available on all platforms including:

The following will not be available during this time:

We thank you for your patience and advise that all effort and expert skills are currently being directed towards improving stability and our customers’ banking experience. We sincerely regret any inconvenience caused.

Even as they promise to fix this over the weekend, the problem for Steward is that they have made such promises before and not fulfilled them. Last time for example, in response to some questions we had posed, the bank told us they expected all systems to be fully operational by 25 February. That’s exactly a month ago.

So whether this fix will finally restore the bank, or not, is something only time can tell.