A few weeks ago, I went to see a Montessori school.

When a colleague here at the office told me he had a trip planned to go see “a different kind of school” for our referral articles, I asked to join him. He had mentioned that the school uses the Montessori way of learning and from the little I knew about it, I needed to know more. I have a 3 year old son so my ears were primed to pick up such signals, as I’m sure some of you that clicked to read this are.

But it was also an opportunity to, for just a day or two nonetheless, leave our small busy city and its noise behind.

A few days later, we set off early in the morning. We arrived at Troutbeck a few hours later. We were met there by Dr. Grace Mugadza, Co-founder and Co-director of the school. She and her husband, Dr. Edwin Davies, started the Troutbeck School two years ago.

They had just relocated from the USA where their two children went to Montessori primary schools. They knew with certainty that their children needed to continue with the Montessori way of learning, and so they went to work building up a Montessori equipped classroom at their new home. And so it was soon enough, that the school could accommodate other children, and the Troutbeck School was born.

The school is up in the mountains, apparently just 200 meters below Zimbabwe’s highest point, the Nyangani mountain, overlooking the Troutbeck Resort and its beautiful lake below.

What is the Montessori Method?

At its core the Montessori Method is based on some simple principles: that the children must be respected, that children are naturally eager for knowledge and are therefore spontaneously primed to learn (even initiate their own learning) in a supportive environment.

The method was developed by an Italian doctor called Maria Montessori around 1897. Her method spread globally and today, estimates suggest around 20,000 Montessori schools worldwide, mostly in Europe, America, India and Australia.

In recent years, the Montessori Method has been popularised by the background stories of the visionary leaders that founded some of the world’s largest companies today, amoung them Facebook (Mark Zuckerberg)  Google (Sergey Brin & Larry Page), Wikipedia (Jimmy Wales) and Amazon (Jeff Bezos). Peter Drucker, the management guru, was also raised the Montessori way. The conclusion drawn is that a Montessori education contributes to creating an innovative mind.

As Dr Edwin explained and demonstrated the approach to us in one of the school’s classrooms, three things stood out for me: The first is the teacher’s focus on the individual within the class to ensure each child understands and masters every concept being taught. The second was the deliberate emphasis on facilitating the individual’s learning and less on teaching them.

The third, and personally what I found quite profound, is how Montessori schools first introduce ideas to children using physical materials before throwing them head first into abstract concepts. I think it’s easy to underestimate how powerful this physical-before-abstract concept is.

The method is simple and really natural. Individual self-paced learning and exploration of physical things around the environment, are the natural things a kid does at home before they are old enough to be thrown into conventional preschool.

And at most conventional schools, the kid’s world is turned upside down with the new need to memorise abstract number systems and written words that are meaningless to them. They’re grouped together with kids strictly according to age and they have to pay attention to things written on a board, all of them expected to get it uniformly, and then move on to the next topic.

If you don’t quite grasp the concepts, you are literally left behind to go through the same process again, and have to carry with you the stigma that comes with being a “thick headed repeater”.

In conventional schools, at least as I experienced it growing up in Zimbabwe, and no doubt as many of you reading this did, the children learn early to memorise for tests without much need to grasp how the taught concepts apply to the tangible world around them.

A clear sense we got speaking to both Dr. Grace and Dr Edwin, was that this wasn’t just about using effective methods to facilitate learning. The Troutbeck School is also about helping the children acquire leadership skills and independence in general.

We could see this confidence when a ten year old boy used boards, beads and test tubes to show us long division. The concept, as he demonstrated each step, was just him sharing things amoung people. “Because that’s what the abstract concept of division is, practically it is just sharing!” Dr. Edwin had said earlier. 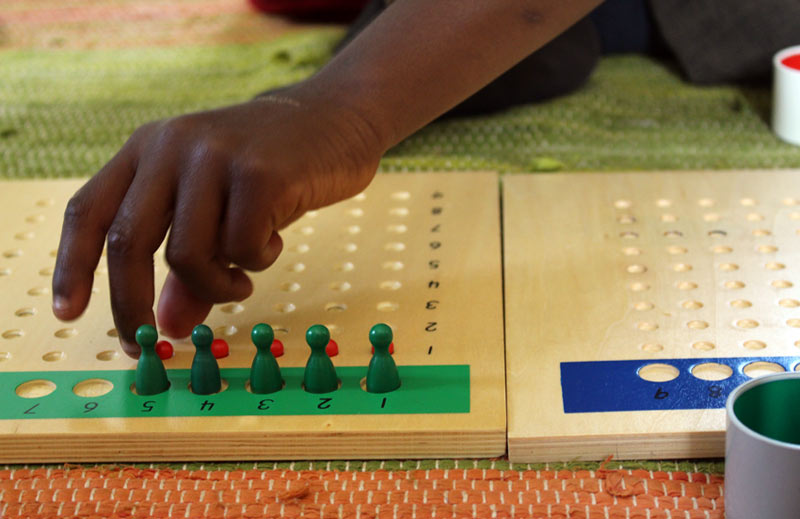 So he shared. Using those boards, beads and the test tubes, he easily divided 3 figures into 5 figure numbers (such as 74 564 divided by 325) . Dr. Edwin explained later that the pupil had actually started on this curriculum just recently and was still going through things that are normally achieved by 6 year old Montessori children. “They are able to do it at a much younger age!” he said.

The boarding school, which uses the Cambridge curriculum, currently has about 15 children, all in primary school. Children are currently admitted at all ages, some of them just 3 years old. Starting this year, the school will be admitting secondary level students.

Why aren’t there many Montessori schools in Zimbabwe?

The Montessori Method feels so obvious. Our reaction, my colleague and I, after being taken through a few concepts by Dr Edwin was to wonder why the word Montessori is alien to most parents in Zimbabwe. Why isn’t there more of this type of learning?

The why, according to Dr. Edwin, is a combination of a number of things.

There’s the issues of cost: trained teachers, the physical equipment and the required low student/teacher ratio. The second is the good old “we’ve always done it this way” and for some reason we feel it’s not broken so it shouldn’t be fixed. This nothing-broken thinking despite clear evidence to the contrary all around us (and I’m not talking about the political state of things at all). I’m talking about how school wasn’t an enjoyable learning process for a lot of adults. I’m guessing this also points to limited exposure to existence of alternative ways.

To be clear, there are a number of Montessori preschools in Harare. Visiting a number of them in Harare I felt however the differences in the interpretation of the Montessori Method at some of them. The few Montessori schools in the country would definitely benefit from an association that sets and monitors standards of the schools, so parents are not drawn to the word Montessori and trust that their kids are taken care of.

Coming back from the Troutbeck School, my colleague and I had so much to process and think about. We’d expected something different, but certainly not to that extent. Not to the extent of challenging our own beliefs. And even our views on small things like an individual’s manners, grace and courtesy.

When I think about the kind of individuals that come out of a Montessori school like Troutbeck, it’s self-assured individuals I see. Young people that will think long term and be innovative, not be afflicted by the short-sighted thinking that has caused so many problems on this continent. The kind of minds that will create and build things, making an impact not just on individual countries like Zimbabwe, but daring to impact the world because they naturally believe they can.

Individuals who will choose and pursue paths independent of the constrained thinking of, but still building upon the work of, previous generations. Individuals that won’t waste time thinking different for just the sake of being rebellious against how the world works, but will harness how things work firmly to create new orders. The kind of individuals that will be self-assured enough to not waste time making points, but doing.

I suspect this is why the founders of The Troutbeck School decided to locate it far from the noise of the now that is Harare. Anyone that has travelled outside Zimbabwe, and especially outside Africa, will know how small minded we can be as a people at times. And how that could be the cause of the rut the continent is in when you compare it to the rest of the world.

Montessori made me want to go back to primary school for rewiring!

There’s so much to write about the The Troutbeck School and the Montessori Method in general in terms of what it can contribute to advancing education in Zimbabwe. Regular Techzim readers will know our interest in education is more than casual. We couldn’t write it all in one article so we’re doing a series on this.

Some more photos of The TroutBeck (Montessori) School:

5 thoughts on “A different kind of education in Zimbabwe: Our visit to a Montessori school”