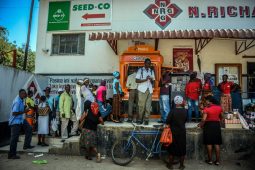 Recently, Mukuru announced that due to the shortage of the Rand in Zimbabwe, it had temporarily suspended South African Rand transfers to Zimbabwe. Suspended in that recipients here can’t collect their money in Rand. Big deal for the recipient? Ofcourse not, Zimbabweans are not exactly clamouring to get Rand. It’s USD cash they want.

For the sender, again, no big deal. They can still use the Rand to remit and have Mukuru do the conversion to USD on the other end.

The USD part is what we found quite interesting. Mukuru is assuring recipients of remittances in Zimbabwe that there’ll be US Dollar cash available at a Mukuru agent near them. Not money in an account, not Bond Notes. USD cash.

Mukuru even has mobile site wap.mukuru.com for recipients to check, which Mukuru agents in Zimbabwe have cash (well, it’s really a check of which agents have paid out cash in the past 24 hours, but that’s a close to accurate who-has-cash).

A quick check we did while writing this article, showed some 126 collection points that have cash, with Harare contributing 40 agents to that figure.

Techzim spoke to Mukuru SA staff last week who told us that they had managed to get some partners who are helping keep the Mukuru network liquid this side of the border. A new kind of agent called a Cash Stop has emerged from these partnerships (see picture).

Our check though revealed a few towns were no agent has cash. Or no one in that area received anything these past 24 hours? Hwange, Mpandawana, Redcliff and Mt Darwin, all had no liquid agents.

Mukuru’s other options like money being transferred straight into one’s EcoCash/Telecash wallet, or bank account, are still available for those that don’t want to be bothered with going to a physical agent.

To be clear, I don’t yet know what the cash situation is right now with other remittance companies like Mama Money, Western Union and Moneygram. Will be finding out what we can and let you know in the coming days.