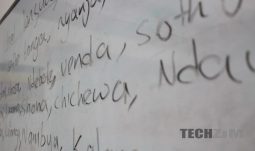 Sometimes it doesn’t make sense why certain stories find their way on Techzim right? An example of such is this very article. Why would a tech blog talk about vernacular languages in the education system?

Here’s the short explanation: First, you are right, Techzim is a tech publication with a hint of business. Education, however, is important within the tech, startup and business ecosystem as both a facilitator and developer of the human capital that builds things and as a consumer of tech solutions.

Yes that makes sense but how is language important? Language at its core exposes what particular populations truly value and the biases they hold towards life. It becomes important for you to understand as much as you can the intricacies of a people’s language if you are to build solutions for them. More importantly, language imparts cultural identity which influences internal things like self esteem.

Anyway, I thought of writing this article when I came across a video that’s circulating on WhatsApp of a white guy in the UK who was speaking very fluent Shona and then asking his daughter to give the names of some specific animals in Shona, which she did. He then challenges Zimbabweans (especially in the diaspora) to teach their children vernacular languages.

I don’t think he needed to merely target Zimbabweans in the diaspora, his lesson is needed by a number of parents with children in private schools here in Zimbabwe too. It is embarrassing how it is somewhat fashionable to have your son or daughter highly fluent in English and be poor at vernacular. As silly as it sounds, a lot of parents choose specific private schools kuti mwana ataure chirungu (for their child to get to speak fluent English). People feel proud to inform that their daughter is not allowed to speak Shona or whatever other vernacular in school.

Indirectly this tells the child that they have something to be ashamed of just for being born on African soil and within the family they belong to. It tells them that their identity is not allowed. Added to these psychological implications are a host of other social problems. When we outlaw local languages in school we are outlawing local knowledge too. We are keeping knowledge from diffusing across the greater population which predominantly speaks vernacular. There is plenty that your child can learn from people who may not have a good command of English and there is a lot that your child can teach them too.

The site of this man on this circulating video reminded me of Dr Edwin whom we met at the Troutbeck School in Nyanga. Dr Edwin is a Scottish gentleman, yea the kind we read about although his accent was toned down by living in the US for some time. One of the things that worried him was how many of the kids that got enrolled at their school did not speak their vernacular languages well, if at all. Their school is thus very deliberate on the development of local languages.

It is embarrassing to  have someone from a totally different culture come and attempt to revive or birth expressions of your own culture within your own children. I wish it were considered embarrassing by all of us. I was at a dinner with people from different African countries recently and I was really inspired by the Nigerians. They were happy to express themselves and their culture without any inhibition. How I wish more Zimbabweans will be like this.

Another departure in practice between the Troutbeck School and other private schools particularly at primary level is the training of kids from a very young age to take care of their own stuff. The Montessori method of learning encourages students to be responsible for their own learning material. The first thing the child does when they get into the classroom is to get their mat from where they work and spread it on the floor. They then get the material they will be using on that particular day. The last thing they do before leaving the classroom is to return all the material properly where they got it and to neatly fold the mat and place it back where it was initially. This happens every single time.

From an early age children must know they have responsibilities and they must be diligent to make sure they carry them out. Over and above this, at the Troutbeck School the kids wash their own socks before bed. I remember my first conversation with Dr Mugadza (co-founder of the school), she told me that there were some parents who took exception to their children being asked to wash their own socks. I was surprised! Is that the generation we want to raise? Folks who cannot converse with their fellow countrymen because they don’t know the language, folks who believe they are entitled to things being done for them, without a shred of responsibility?

The Troutbeck School and others are doing a good job to instill values to our children in an environment that is rid with self preservation and selfishness. Let’s take a cue from these efforts and infuse our children with pride in their identity and with responsibility and service. Let these values inform our choice of school for them.

9 thoughts on “Private schools, local languages and all the rest…”