I recently came across an application called Tino & Tana made by Dream Box. The app is made for children aged around 3-5 years who are in Early Child Development (ECD) level of education. It aims to help these kids learn how to count from 1 to 10 through interaction with everyday African objects.

The game starts off with a story where Tino and Tana the virtual characters of the game are in their back yard playing and a strong wind comes by. The wind then blows the numbers that they were playing with across the yard. The two children then decide to play a new game of finding the scattered numbers. This is where the child comes in and starts playing. 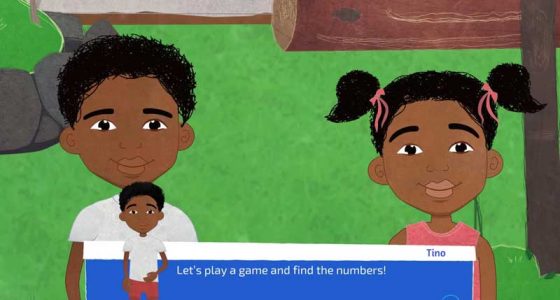 The moment you start the game, you get a sense of a deliberate visual design as the game screen is colorful and doesn’t have a lot going on. This is good for kids as they can get distracted easily if there are many things demanding their attention. On the topic of design, the initial story is narrated by a lady in one of the three languages that the game supports: English, Shona, and Ndebele.

When I actually had to play the game, that’s where the game kind of lost and surprised me. I came into it assuming that it’s going to be a hide n seek kind of thing where you look for numbers that are partially hidden behind objects. So there I was clicking every object within sight but nothing was happening then I accidentally clicked on where the initial number was and then the surprise came.

I was confronted with a mini game within the main game. The task was to match tails to their appropriate animals. However, after completing that with ease, I was back to clicking all over looking hoping a number would pop up. After my initial frustration went away, I discovered that I had to click the number that had appeared.

So it starts with 1 already visible and you click it to find 2 after the mini game then you click 2 and get a different challenge to find 3. This is the sequence that takes place until you get to 10. Someone told me that I was overthinking it all and that’s why I quickly got frustrated so I decided to let a child within the target group give a go at the game before I wrote this article.

The child managed to click on the first number and play the first mini game but he ended up clicking the same number. Before I knew it, he was saying that he wanted to play a different game. Someone had to come to the rescue and tell the child where to click next. The moment this happened, I knew that what I had felt earlier wasn’t my fault.

Being a user and a developer, I have come to value the golden rule “Don’t make me think”. If a user has to think and use some serious brain power to uncover how to use your app or software then you’ve already failed in the user experience design department. Why does it matter? Most people will then quit using it due to the frustration just like the child who tried this game.

Honestly, for a game targeted towards toddlers, it was not close to providing an experience where the child just does what feels true without consciously having to think about it. However, that just about where the cons end. Since I had discovered the pattern, I went on to play the whole game and it was good as each discovery of a new number had a different mini challenge.

Once a mini challenge was passed and a new number uncovered, the narrator would come in with a nice congratulatory remark that made me feel accomplished. Due to its support for different languages the experiences in Shona, English, and Ndebele feel different from each other.

A child could learn how to count from 1 to 10, learn what those numbers are called in the language they would have chosen and even learn different skills like Matching, Ordering, Classification and Pattern Recognition. For the developer, I would suggest that they fix that user experience issue and before you know it, many parents will be letting their children play with the app instead of watching a cartoon.