Since morning, some fliers indicating that EcoCash will be suspending EcoCash Mastercard online payments from the 16th of August until further notice have been circulating.

We know fake news is a serious problem, especially now that we’re so gullible to it due to the fact that Zimbabwe has become uncomfortably unpredictable… especially wherever money is concerned. We made efforts to contact EcoCash so they could comment on the authenticity of the news. We kept our fingers crossed as we waited for a response, but well, turns out our fingers cramped for nothing. The news is true.

EcoCash will be releasing a company statement tomorrow but since we already on it, we might as well…

The new developments (though development doesn’t really sound right but oh well) state that from the 16th of this month, we won’t be able to make any online payment using the EcoCash Mastercard Debit Card. Right when we had made peace and re-strategized on how to go about our online shopping following the most recent slash at the beginning of this month; we get this! This is actually the part where one appreciates anything but a zero.

Anyway, that’s not the only bad news EcoCash has. Effect from the 1st of September, the international transaction limits will further be slashed. The POS limit per month will be US$75 while the monthly limit for ATM withdrawal will be US$25 – making the limit US$100 altogether.

However, local transaction limits remain unchanged at US$10 000 per month.

At this rate, the pessimist in me predicts that by the time we get to the end of the year, the Ecocash Mastercard Debit card would have completely scraped off all its international uses. Guess the EcoCash mastercard would just be as good as any other Zimswitch card out there. 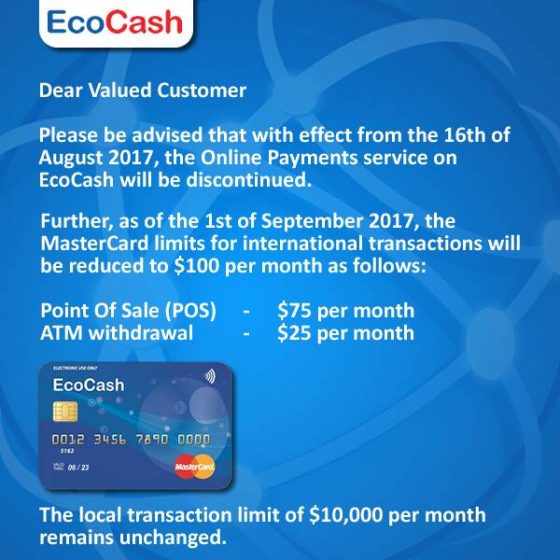 12 thoughts on “Is EcoCash discontinuing its Mastercard online payment service?”