All you have to do to qualify for the promotion is to top up your TelOne broadband account for four consecutive months during the time period stated above. The extra data that you receive will then expire after 30 days. TelOne is probably trying to get more people to consistently buy and use their broadband internet services hence this incentive.

To our surprise, topping up your account for 4 straight months is the only condition you need to meet so they are making it easy for anyone to participate if they have TelOne broadband internet Wi-Fi at their home or office. The promotion will be available for all the different packages that TelOne offers for ADSL and Fibre.

How does it work for limited packages?

The way the extra data is distributed is different between limited and unlimited packages. Let’s take a look at limited packages, for example, the $25 ADSL starter package which gives you 30GB. Let’s say you pay for it for the 4 consecutive months, on the fourth month that you recharge, you will then get the extra 30GB.

The 30GB that you get will be immediately added to your account after you’ve purchased that ADSL starter package. When that extra data is added, your account will now have 60GB. The 60GB will then expire in 60 days as the extra data also adds a month of the validity of your data. This example is what will happen for all the different packages, what will change is just the amount of extra data you get depending on the package you purchased.

What about TelOne unlimited packages?

For unlimited packages, it works a little bit different. After paying for unlimited in the 4th month, you will not get unlimited on top of unlimited as that just doesn’t work. Instead, you will get an extra month of unlimited internet subscription that will start as soon as the one that you bought for expires.

What if you change packages along the way?

Tell us what you think about this new promotion from TelOne. Will it get you to faithfully subscribe for their broadband services just so you can get the extra data? 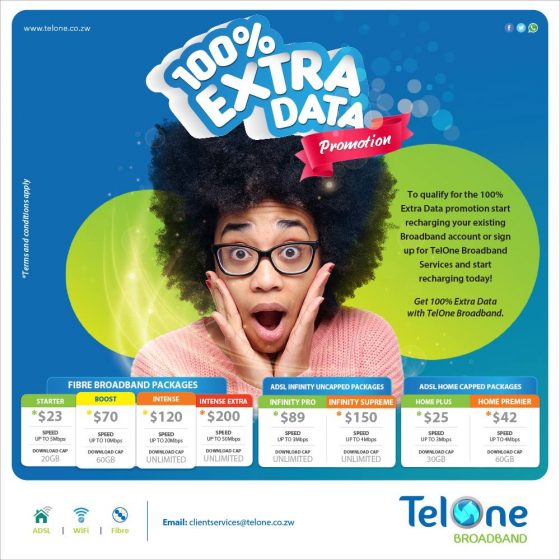