WhatsApp recently released a new beta version for Android 2.17.295 of their app under their beta program. The update itself didn’t contain any visible features or changes. However, according to a report from WABetaInfo, they uncovered hidden hints within this beta version of the app. The hints pointed to an upcoming feature within the app called WhatsApp payments: “the immediate bank to bank transfer with UPI”.

The feature is still hidden as it is still under development. For people to use WhatsApp payments if they end up coming, they will have to accept the new WhatsApp Payments and Bank Terms and Privacy Policy. Unified Payments Interface (UPI) transaction system is similar to RTGS but from my brief research on how it is being used in India, it seems like UPI is faster and more reliable. It’s no surprise that a feature like this would use a standard for transfers that’s already in use in India. This is because, India is one of the large markets where WhatsApp is widely popular and used. 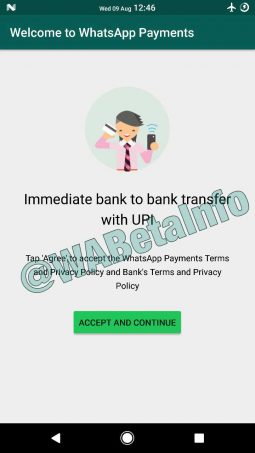 We recently talked about how bank queues could be shortened if WhatsApp was utilized. The article outlined how banks could place people in a schedule for service through the app. The person would be then notified of the time that they would need to come. This would result in a more efficient and organized way of facilitating banking services at a branch.

That utilization of the app in that way is great and I wonder why banks locally haven’t started using it. If this feature of payments in WhatsApp does come, could it be a useful thing for banks? It seems like it could be but more investigation into it would need to be conducted. More importantly, this feature will probably be one way that Facebook will monetize WhatsApp.

It’s also unclear how much WhatsApp will charge for doing these bank transfers from their application. However, it might not be high as the UPI transaction system that they will be using is free of charges according to an implementation of the method in India. If it turns out that it is not that much, would you consider doing payments in the app or it’s not even an option? Let us know what you think in the comments sections.