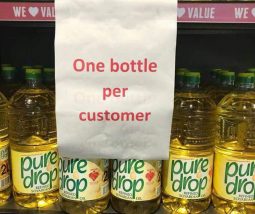 This past weekend was an action packed one and it all started on WhatsApp, no wonder the Chinese government is restricting the app. So some guy or girl drafts up a message of doom on WhatsApp telling Zimbabweans that there are about to be serious shortages of basic commodities because of the excessive ‘printing’ of ‘non’ money by the RBZ.

Zimbabweans responded. They need not hear such news twice, they know how it was in 2008 and they won’t let it spring up on them again. Droves of people went to their closest supermarket or tuck shop to buy as many essentials as they could. The clever word smiths were ready too, they already had a term for what happened: ‘panic buying’ they called it and panic buying it was.

The Governor of the Reserve Bank of Zimbabwe, Dr John Mangudya was quick to respond too. He issued a statement assuring the nation that all was in order because his institution was now allocating more resources (he calls it foreign exchange) to the importation of our everyday basics. He even asserted that the Zimbabwean economy was on the mend at the backdrop of good performance in agriculture and mining. We felt insulted by this declaration.

Now the weekend was extended or at least the action continued yesterday. The collective body that represents the companies that make cooking oil (these folks supply 95% of the cooking oil we consume) tell a different story:

The governor in his statement said that he had increased allocation of forex to import basic commodities. The cooking oil guys and girls say no. It’s either cooking oil is not considered a basic commodity by the national grocery shoppers at RBZ or the man just lied. The oil companies said for the past three months they have only received 44% of the foreign currency they need to import raw materials to ensure you and I have muriwo une mafuta.

What are the raw materials again?

A big portion of what these manufacturers are calling raw materials is nothing but soya beans and other such AGRICULTURAL produce. According to Dr John, the economy is on the mend because our agriculture is shooting through the roof. In our article on Saturday we raised the question why he would say he has increased spending on the importation of basic goods if we are doing so well. Turns out the guy was just not being truthful: he is giving cooking oil makers 44% of what they need. Added to that, there is no agriculture to talk about if we need to import USD20million worth of soya beans per month just for cooking oil.

Oil makers or VaMangudya, who is telling the truth?

To answer this question we have to ask another one: why cooking oil? Zimbabweans went on a rampage to stock up on all they could that would ensure their survival in the 2008 re-enactment. The commodity to really disappear off the shelves was cooking oil. Why? The answer could be really that RBZ grocery shoppers are allocating less than half what’s required to ensure oil keeps flowing into our pots.

The Reserve Bank of Zimbabwe seems to have a thing against all things oil because our cars are starving of fuel. The fuel queues are getting longer. It’s annoying having to lose productive time just waiting in line for something as basic as petrol for your car. They lying Tom here is the governor, he tells there are no shortages when we see them. Are people panic buying petrol too? Maybe they are.

The Governor spoke to The Chronicle yesterday and attacked banks and ‘cash barons.’ Besides not knowing what a cash baron really looks like I see this rhetoric as an exercise in futility. How does he plan to act on the selling of cash when his boss is not even aware of any such selling of cash?

What’s happening with the ‘RTGS printed’ money is the most obvious thing that was going to happen. If you trace the history of money you will realise that what is happening in Zimbabwe right now is play by play acting out of the history of money from the ancient Egyptians who invented the earliest forms of money through to the Greeks of old right to post World War 1 Germany and right up to Zimbabwe version 2008!

Who is the biggest buyer of foreign currency on the streets?

I will obviously not risk being arrested by answering that question. Minister Ignatius Chombo read the riot act and promised to arrest whoever answers that question truthfully.

What’s the contribution of WhatsApp in all this?

The RBZ Governor was very cross with the originator of the WhatsApp message that ’caused’ the shortage of cooking oil. Minister Chombo was equally cross and he even confessed to know who this person is. However, the dude or dudette who sent that message for the very first time was not the one who cut the national cooking oil budget by 44%. They probably don’t work at any tall building where our grocery needs are decided.

14 thoughts on “Mangudya lied, he’s the one to blame for cooking oil shortage says the manufacturers”