This post was written by a Guest Author. The views expressed in this article do not reflect those of Techzim but of the Guest Author.

No Jamie Dimon, Bitcoin is no fraud. It’s either you don’t understand it, or you intend to deceive the people or both!

When I talk about crypto-currencies, I often draw on a quote by Wences Casares, a bitcoin entrepreneur. Casares says, “In Spanish, we have a saying that when a genius points at the moon, a fool looks at the finger. I find that happens a lot with Bitcoin.”

Jamie Dimon, Chairman and CEO of JP Morgan Chase seems to have mastered the art of barking at a moving rocket. In case you missed his comments, on 12 September 2017, Dimon called Bitcoin a “fraud”, while speaking at a conference. He further claimed that, “it’s just not a real thing, eventually it will be closed”. You can find the report in a CNBC article here. This is not the first time that Dimon has bashed Bitcoin. In January 2014, again speaking to CNBC, Dimon claimed that it is “… a terrible store of value. … It could be replicated over and over.” Back then, Bitcoin was trading at around $700. You can read the article here. The value of bitcoin has risen multiple times since then.

There are many plausible reasons why Dimon continuously attacks Bitcoin in particular, and crypto-currencies in general. Firstly, Dimon was born before computers (as we know them today). Secondly, he is probably just ignorant about Bitcoin and crypto-currencies, and how they work, in which case he should refrain from speaking authoritatively about things he least understands. Lastly, Dimon is a Wall Street banking executive running America’s largest bank, and earned himself $28.2 million in 2016 working for it. I believe that Dimon is frankly concerned that Bitcoin is slowly eating his lunch. To understand why this, we have to look at the drivers that led to the formation of Bitcoin.

It is widely agreed that the global financial crisis of 2007-2008 was caused by banks, triggered by the sub-prime lending crisis. The world watched in horror as banks either collapsed, merged or got bailed out in North America, Europe and Asia. Remember Lehman Brothers, Bear Stearns, Washington Mutual, AIG, Northern Rock, Merrill Lynch, Royal Bank of Scotland, Bradford & Bingley and Fortis among many others. The United States senate, in its Levin–Coburn Report concluded that the crisis emanated from “high risk, complex financial products; undisclosed conflicts of interest; the failure of regulators, the credit rating agencies, and the market itself to rein in the excesses of Wall Street.” You can find the report here. In the report, Dimon’s bank is cited numerous times.

When banks ruined their own industry during the financial crisis, they triggered a worldwide economic crisis, which left the global economy teetering on the brink of collapse. Many economies have not yet recovered from the effects of that crisis. Governments all over the world pumped trillions of taxpayer funds into banks to contain the domino effect. Typical moral hazard! But how did governments fund bailouts? They either used taxpayer funds, or printed the money. This printing of money is no doubt inflationary, and was couched in nice-sounding terms such as quantitative easing. The bank bailouts led to devaluation of fiat/government-issued currencies as well as currency wars – which still prevail to this day. Overall, this caused a net transfer of debt to the public purse. In short, banks defrauded taxpayers worldwide.  Therein lies the genesis of Bitcoin, a decentralized financial system that takes away power from a global elite like Jamie Dimon – the so-called one percent!

How does Bitcoin slowly chip away at Dimon’s lunch? Bitcoin is a decentralized peer-to-peer network. You don’t really need a bank to use it. Banks function as trusted third part intermediaries that run private ledgers which users never get sight of. It’s how they largely make their money. This has given them so much power that they can game and tank the global financial system. Satoshi Nakamoto and others realized a new financial system was necessary and invented blockchain technology, bringing about what in my view is the greatest innovation since the Internet in the 90s. Other than through the use of cash, Bitcoin makes it possible to make payments without JP Morgan Chase, or any other bank for that matter. Bitcoin’s decentralized ledger is public and can be viewed by anyone, including JP Morgan, whereas clients of JP Morgan have no clue what their bank’s ledger looks like or what the bank is up to. So, Jamie Dimon, it isn’t fraud! But let’s see who is a fraud!

Dimon joined JP Morgan in 2004. He was the CEO and chairman when the bank engaged in a plethora of wrongdoing and wheeler-dealing that eventually led to the global financial crisis of 2007-8 and subsequent printing of trillions of dollars across the world to bail-out banks. Dimon presided over the receipt by JP Morgan of $25 billion in bail-out funds from the U.S. Treasury in October 2008. The question is – what role did JP Morgan play in causing the global financial crisis under Dimon’s watch?

William D. Cohan, a former managing director at JP Morgan, has written a detailed account of the case against JP Morgan in his article titled Jamie Dimon’s $13 Billion Secret: The inside story of JPMorgan Chase’s landmark mortgage settlement. You can find the article here. In short, under Dimon’s leadership, the bank manufactured and sold toxic mortgage-backed securities across the world. Cohan cites Wagner, a former US Attorney for the Eastern District of California, as saying, at JP Morgan, “the very due-diligence process that was supposed to be identifying bad loans and weeding them out was essentially being subverted or circumvented in the rush to get these to market.” According to Cohan, Wagner’s unfiled draft complaint against Dimon’s bank cited just ten examples of fraudulent violations by JP Morgan, but which “do not encompass the full extent of JPMorgan’s fraudulent scheme.” Pressured by the federal and state prosecutors, Dimon and his bank agreed in November 2013 to a settlement where his bank paid a record $13 billion “in a comprehensive settlement of mortgage-related securities claims”. It was the largest financial settlement of all time.

Dimon’s bank literally made billions out of knowingly bundling toxic assets and selling them off to unsuspecting investors. Now that is fraud. It’s a wonder he is not in jail.

What Dimon did not mention in his quip is that his bank has been widely testing and/or using the technology that Bitcoin brought about – Blockchain. In fact, JP Morgan has latched onto the technology and is running multiple blockchain projects. If Dimon understands blockchain and the immutable nature of distributed ledger technology to the point where he allows such technology at his bank – one wonders why he thinks a digital currency which brought about that technology and runs on that technology makes that currency a fraud. Is he out of touch with what’s happening in his bank, or he is just being disingenuous?

Dimon said that he would “fire in a second” any JPMorgan trader who bought Bitcoin, claiming that “it’s against our rules and they are stupid.” What is interesting though is that directly or indirectly, for themselves or on behalf of others, as was exposed by Twitter user @IamNomad yesterday, JPMorgan Securities Limited purchased 19102 bitcoins through a Swedish Exchange on 13 September 2017. You can find bitcoin holdings here (if they have not yet been sold or moved by the time of publication).

See below an image of the transaction. 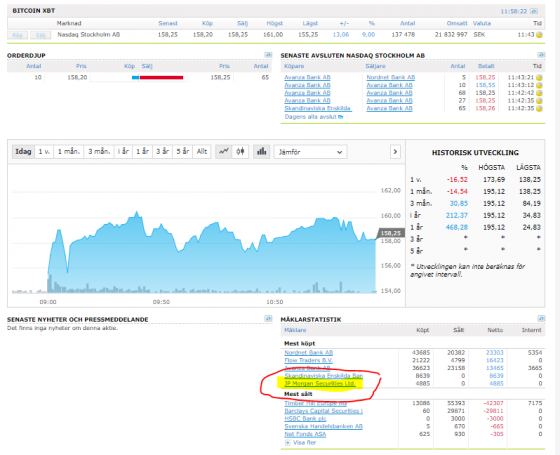 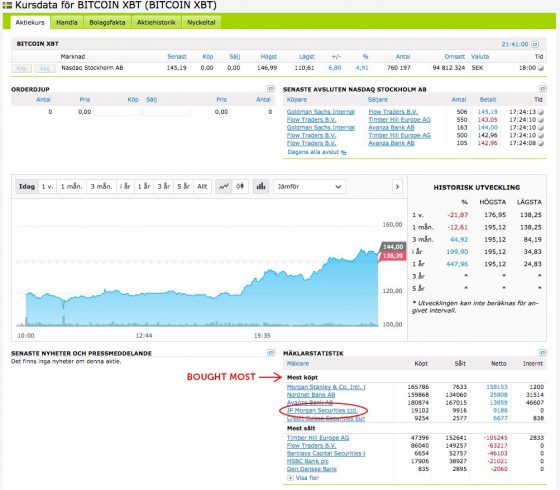 We wait to see if Dimon will fire people within his organization who bought these Bitcoins after his statements since “it’s against our rules and they are stupid.”

If Dimon thinks that “…eventually [Bitcoin] it will be closed,” then be better get the best brains JP Morgan can buy to explain to him how it works. Bitcoin is here to stay. Bitcoin can’t just be shut down because it runs on a decentralized network with no single point of failure and it’s exactly why it’s designed that way. His statements are just akin to a dog barking at a shooting rocket. The barking won’t stop Bitcoin and blockchain from revolutionizing banking and finance.

Taurai Chinyamakobvu is an enthusiast of blockchain, Bitcoin and other cryptocurrencies. He is an early stage investor and director of Bitfinance (a blockchain company), Flocash and Wezeshwa Fund. He is also an advisor to some international corporations. He can be contacted on tchinyamakobvu@gmail.com

5 thoughts on “No Jamie Dimon, Bitcoin is no fraud! You either don’t understand it, or you intend to deceive the people!”