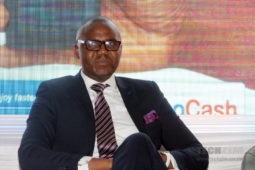 The day before yesterday, Techzim wrote about how Steward Bank had gone exclusive with mobile and online banking and was no longer processing manual RTGS or Internal transfers. When that article was written, we were using the information that we had obtained ourselves. One of the Techzim members had gone to the Avondale branch of Steward Bank to try and do an RTGS transfer.

When they tried to do so, they were told that Steward Bank was no longer processing these transfers. It wasn’t just the team member who was told that but everyone who was in the bank and trying to do the same transfer was also told the same thing. Now, as we were writing the article, we had reached out to Steward Bank for an official comment and they said that they’d get back to us with a response.

Steward Bank has got back to us and they say that they notified people, well, Dr Lance Mambondiani, the CEO of Steward Bank, actually said that. According to him and his team,

A customer notice was issued starting the 15th of September advising customers of our intention to migrate the processing of some payment services such as RTGS, Internal Transfers and Balance enquiry to our mobile platforms. SMS broadcasts were also sent out during this period. Customers visiting any of our branches throughout September would also have seen posters advising customers of this change which we believe will significantly improve the quality of the service we offer. Our core focus is to improve customer experience through digitisation especially through the square App which is mobile-driven. We appreciate that we have a large customer base and it is not always possible to reach everyone at the same time, this is why we are assisting some of our customers who might still need to rely on paper-based transfers through this transition.

The notice that’s being referred to is the one below. 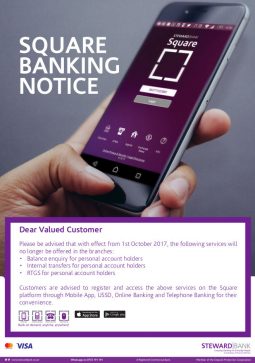 Just because some people didn’t get the SMS or email notification or didn’t go to a branch to be told that doesn’t mean that Steward Bank didn’t try to notify people as I had assumed in the previous article. Dr Mambondiani even acknowledges that when he says that they have a large customer base and it may not always be possible to reach everyone at the same time.

However, to increase the chances of everyone being notified, Steward Bank could have posted the notice on social media as some who didn’t get the SMS notification could have seen the notice there.