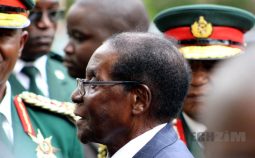 I almost wrote this article five weeks ago but I aborted mission. First, I asked myself what mining had to do with Techzim and then I was a bit scared to antagonise the readership here with nothing but my conjecture. Why have I written the article now? First, it’s about the macro economics not mining and second, this is no longer merely my conjecture.

The long serving presidential spokesperson, George Charamba recently said that when Robert Mugabe claimed that the country had lost $15 billion he just pulled the big number out of thin air and meant it ‘figuratively.’ By the way, in case you’re lost, the $15 billion I refer to is the money that Former President Robert Mugabe claimed was never accounted for and had gone missing in the diamond mining operations in Marange. What made me question the existence of the $15 billion in the first place?

The Math Doesn’t Add Up

I bumped into global diamond production and revenue figures for 2016 and I was surprised. Botswana is the second largest diamond producer in the world (behind Russia) and Botswana produces about 22% of the world’s diamond carats. This translates to just above $3 billion in the year 2016. Say what?

Output of diamond has been increasing in the world since the Marange days but let’s assume the output was at this level back then. It would have taken the world’s second largest producer of diamond 5 years to get $15 billion as revenue.

Canada is considered the most active nation in the diamond mining market although it is at number 3 in output terms producing 14% of the world’s carats. This puts their revenue at just below $2 billion per year according to 2016 figures. The most active diamond mining nation would need more than 7 years to reach revenues of $15 billion.

Now, the former president declared that the Zimbabwe government had lost $15 billion. This means this was not total revenue but the profit after operations and at that, not total profit because the government was not entitled to 100% of the profit.

Diamonds from Marange were sold from 2010 to 2012. Can we really expect that we produced in three years what Botswana can only produce in 5 years? Was our technology (well the one brought by the mining firms that partnered the Zim government) sufficient to produce at those levels?

Marange fields are considered to be the largest diamond find this century but this is in carats not in value terms. Rough diamonds sell at around $100 per carat. Zimbabwe’s diamonds were on average below $50 per carat when sold in 2010 through to 2012.

We sold about 28.9 million carats during this time which would make gross sales of about $1.4 billion if we assume $50 per carat. The math is just all wrong.

Where Did The $15 Billion Figure Come From?

George Charamba says Robert Mugabe said he just pulled the number out of thin air. I think that part is true. Charamba then says Bob told him he just said the figure to stress a point because he was angry. I don’t believe that is the reason for saying $15 billion. That part is probably untrue.

I am not saying Charamba was not told that line by Bob. Whether that’s what Mugabe said or not, it is probably not the reason why that number was pronounced. I think the figure was calculated by a crafty mind to change the discourse of conversation in Zimbabwe and it worked.

First thing that was created was something else to point to besides Uncle Bob himself as the cause of all our economic problems. Yes people laid responsibility on Mugabe but the rhetoric became, “deal with this issue of $15 billion, we want our $15 billion…” That was a far better discourse than, “Uncle Bob what are you still doing in office? How is the economy going to improve?” These answers VaMugabe did not have.

We must always remember that economics is a behavioral science that tries to explain phenomena that is driven by public perception more than anything else. If you can influence perception and sentiment you can influence much in the economy and in politics. Bob influenced what the conversation became after his $15 billion declaration on Thursday 3 March 2016.

I think this was always the end game.

Civil society and opposition politicians played right into the play book of the maestro. Their rallying call became, “Bring back our $15 billion.” I don’t know of anyone in those spheres who questioned the figure stated. In the myopia of having something to rally up crowds and leverage public anger the opposition did not care to question the math.

Mugabe was happy for that diversion. As long as it was someone’s fault somewhere who had defrauded the country of billions then he was somewhat safe. The conversation essentially gave the illusion that, had Zimbabwe not lost $15 billion then everything would have been OK. After all $15 billion is nearly four times the yearly national budget expenditure.

I am one of those who did not question the figure. In fact I am worse because I reasoned that if Mugabe admitted to $15 billion then it meant that the fiscus lost much more than that. That is exactly what Gushungo wanted me to think…

38 thoughts on “What If There Was Never Any $15 Billion To Start With?”