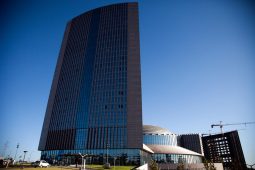 French paper Le Monde has been revealed that the Chinese government was spying on the African Union (AU).

This came after China ‘gifted’ the AU a building packed with surveillance devices. The current AU headquarters building in Addis Ababa cost $200 million and was paid for and constructed by China as a ‘Gift of China to friends of Africa,’ which happens to be the building’s name.

If Le Monde’s claims are true, the Chinese’s definition of friend is completely different to the one we Africans hold.

In January 2017 employees at the AU headquarters noticed that data transfers were at a peak between midnight and 2 am. The fact that data usage was peaking during that time was strange because the building would be almost empty during that time period.

They carried out some investigations and realized that the data was being sent to servers in China. The data being sent to the servers in Shanghai included confidential information. This had been going on from 2012 when the building was commissioned until January 2017 when they discovered it.

The AU did not want a scandal and so after discovering the massive data breach, they quickly acquired new servers and began encrypting communications. The Chinese offered to configure the servers on behalf of the AU, an offer which was refused.

In July 2017 the building was combed from top to bottom by a team of experts from Algeria looking for hidden spying devices and other potential weaknesses.

Le Monde says they got all this from a senior AU official on condition of anonymity.

The Chinese government did not respond to Le Monde’s request for comment and so the story was published without one. Since the story’s publication however, China could not afford to stay silent. Said the Chinese ambassador to the AU,

I think the report is a sensational story, but is also preposterous and absurd.

I really question its intention, I think it will undermine and send a very negative message to people. I think it is not good for the image of the newspaper itself.

Certainly, it will create problems for China-Africa relations.

The AU has largely ignored the report and made no note of it in the opening remarks at the 35th Annual Session on Sunday. Some Afican leaders have spoken though. Rwandan President Paul Kagame said,

I don’t think spying is the specialty of the Chinese. We have spies all over the place in this world. But I will not have been worried about being spied on in this building.

There is nothing to be spied. I don’t believe it.

We might never know the truth. Both the Chinese and the AU responded in the manner you would expect them to – deny everything.

6 thoughts on “Report Says China Was Spying On The African Union, China Responds”