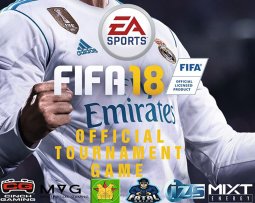 A bit of a while ago I once wrote about the potential I saw in gaming in Zimbabwe. In that period I bumped into someone interesting. His name is Thomas Arnold and the founder of Zimbabwe Mind Sports Union (eSports Zimbabwe)

Not sure how many of you know of eSports Zimbabwe but it’s a group of some pretty passionate gamers based in Beitbridge. It was founded in 2015 and has had a strong stance on shaping the eSports space in Zimbabwe.

They have hosted a couple of FIFA tournaments in Bulawayo with contestants within our boarders as well as attended gaming fests held just across Limpopo over in South Africa.

Towards the end of 2017 they were granted a licence by EA, one of the biggest names in gaming known for developing gaming franchises like FIFA, Battlefield, Mass Effect, Need For Speed, allowing Zimbabwe, through eSports Zimbabwe, to be recognized in the 2018 FIFA eWorld Cup.

If you didn’t know by now, this year is when the FIFA World Cup is happening in Russia later in the year. In addition to that there is also a FIFA eWorld Cup in the mix for those of us that rule in the virtual realm

In the Grand Final just 32 of the very best from all over the world will be taking part. In 2017 FIFA.com registered over 7 million participants world over or roughly half the population of Zimbabwe. No pressure lol.

By now all you guys are looking for is a click-here-to-register/sign-up button don’t worry it’s coming. You wanna register for the eFIFA 2018 qualifiers this is the link you wanna click.

The venues for the tourneys are Talk City in Harare, Bulawayo it’s Kings of Analogs and in Beitbridge its the eSports Zimbabwe offices.

Registration is from the 16th to the 18 of February. There is a calendar of the events that eSports Zimbabwe will be hosting if you want to circle some dates

Now not all of us are FIFA die-hards, I personally am a Motorsport fellow and occasional first person shooter. eSports says they will be adding Mortal Kombat, Injustice, Call Of Duty and Battlefield to their 2018 roaster. Some much needed variety if you ask me.

I’m curious to find out what you gamers out there expect from eSports. I’m waiting in the comments section.