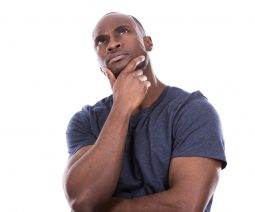 You may have seen the viral video of a woman asking Google Assistant ‘who is Jesus Christ?’ Google failed to respond and this got the Techzim team thinking whether Google holds prejudices against Jesus. If you haven’t check out the video below

In the video, Google seems to be ready to respond when asked about the identity of Buddha but not ready when asked about Jesus Christ. This seemed very damned prejudicial and being the geeks that we are we had to see for ourselves.

We tried asking Google Assistant about religion and a few other questions that seemed interesting to us. 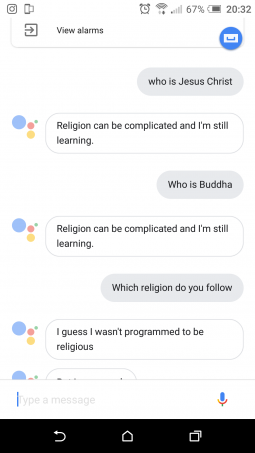 In our tests, the Google Assistant could not give an answer to the identity of both Jesus and Buddha. We asked if Google followed a particular religion and the Assistant admitted it ‘wasn’t programmed to be religious.’

Google has no prejudices…

Our tests saw Google give the same response in relation to Jesus and Buddha’s identity. I think this proves Google Assistant has no religious prejudices.

Google probably just understands the fact that religion is a touchy subject. Any response the Google Assistant gives in relation to Jesus Christ or religion, in general, could create a controversy. If Google declared it’s religion as Christianity they would alienate all the other religions and risk losing those customers. Because that’s the case, Google makes sure that responses in relation to such touchy issues like religion/gender/politics are neutral.

Here are some other questions we tried to ask the Google Assistant. 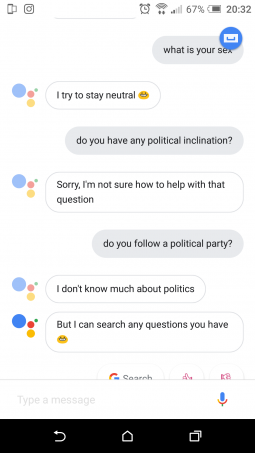 Google’s Assistant tries its best not to step on any toes. The service opts for neutrality on issues that could cause any controversy or a potential loss of customers.

8 thoughts on “Is Google Prejudiced Against Jesus?”