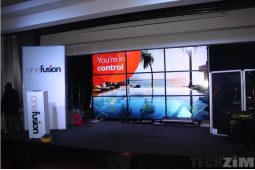 Over the past several days, NetOne customers have been complaining bitterly about how the once popular OneFusion mobile broadband bundle has been a huge letdown. Data is depleting quickly. Disappearing some say. Pictures and videos on Facebook and WhatsApp won’t load.

NetOne says it can’t do anything about it at the moment. It’s Facebook’s fault, the company keeps telling customers mechanically. Apparently, Facebook made some changes to the WhatsApp and Facebooks apps, and those changes have compromised the OneFusion bundle.

We sincerely apologize for the failure to download or playback media on Facebook (or WhatsApp) using the social media bundle. Just to put you into perspective, Facebook, who are also the owners of WhatsApp, have made some critical changes to their new mobile app to the extent that while content (video, image or audio) may appear to be residing on the Facebook or WhatsApp, it is in actual fact saved on Google or Amazon cloud services.

This we discovered through preliminary investigations carried out by our technical team in conjunction with our other partners. That said, the effect of such file architecture is that while in our system we only configured the IPs provided by Facebook as whitelist, IPs from Google and Amazon to which such download sessions are being redirected are not, thus, making them inaccessible unless you have pure data or real money on your account.

Put simply, when you try to access the media file you are being redirected to either Google or Amazon cloud services and the only way to download the media is have real data on your phone. The complexity of the matter is that these IPs change all the time, making it very complex for us to come up with a long term solution to the issue. In that regard, we really appeal for your patience while a more sustainable solution is being worked out. Once again we apologize for the inconvenience caused by this development.”

But customers won’t have it. Especially because NetOne is basically sending this complicated message to anyone that enquires without bothering (at least based on what we see on Facebook) to engage each customer individually who has been affected.

What is really surprising and frustrating to customers is that, even with the full knowledge of the product being faulty due to the claimed changes, NetOne continues to advertise and sell OneFusion bundles. It’s as if NetOne management feels it’s enough to apologise, explain the problem, do nothing to fix while continuing to take the money. It’s not just NetOne that’s failing its customers. The regulator too, is failing.

What NetOne’s message basically says is that Facebook and WhatsApp content is now served from Google and Amazon servers and that their Deep Packet Inspection tools used to meter data based on the bundle bought, have been rendered useless.

On the surface, it’s surprising that so that it looks like NetOne’s the only company affected by this change. The reason could, of course, be that Telcel and Econet do not use the same vendor that NetOne uses. If that’s the case, NetOne needs to find a new vendor pronto.

This is a huge problem for the company and NetOne risks losing customers it has worked so hard to get (with little benefit to their bottom line so far). It would really be great and NetOne would gain some points with customers if they at the very least did the following:

For its part, the regulator, POTRAZ, needs to intervene. When there’s a public outcry like this POTRAZ needs to start an investigation instead of waiting for individual customers to formally write letters of complaint. In such situations, even a regulatory fine should be considered to deter MNO from such practices.