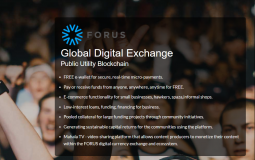 A South African tech company, FORUS, is partnering with Zimbabwe Stock Exchange (ZSE) to implement a blockchain-based solution which is aimed at providing a platform to handle transactions both on mobile and web. The solution, Global Digital Exchange (GDE) is being launched sometime this month in South Africa, Caribbean, Canada, and Zimbabwe.

Who are FORUS and what is GDE?

FORUS(pronounced for-us) stands for Free, Open, Real-time, Ubiquitous & Secure. The solution is meant to be open to both, people using banks and those who are not using any banking service at all. This system is meant to compete with services such as Visa and Mastercard as they believe the global banking system was not built to address Africans or low-income societies in general.

The solutions being proposed as part of Global Digit Exchange:

FORUS also aims to categorize communities into groups according to the problems they face. Communities with common characteristics will be helped to overcome their financial challenges.

FORUS’ owner, Sonny Fischer started Renaissance Retail – a point of sale (POS) business- in 1997. He got into banking eight years ago and worked on a consultative basis for ABSA in South Africa. FORUS will adopt an ad-based service and Fischer said ‘If Google and Paypal had a baby, it would be FORUS.’

Most of the information concerning GDE is coming from FORUS right now so it’s hard to actually know how their product will function until it’s in the public and we have an opportunity to see how practical it is.

It all sounds a bit idealistic and for a product launching this month you would expect more information or awareness. Maybe I’m wrong and this product will actually be as ground-breaking as FORUS promise. With the launch around the corner, I’m sure we will know soon enough…