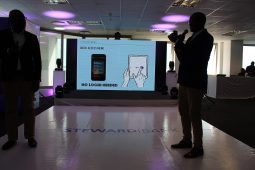 One of Zimbabwe’s youngest banks, Steward Bank has just introduced new products in a bid to become an innovative and leading player in the digital space. The bank is advancing its innovation momentum that is partly defined by the recent introduction of Kwenga.

They had an exhibition today where they were showcasing their new products. The exhibition is marked by the introduction of modified Social Media Banking, a Bot called Batsi, a revised App called Square 2.0 and a revamped online banking platform.

Steward Bank says that its initiative will enable users to be connected to all their platforms with one set of credentials hence users are saved from repeatedly seeking a series of authentication to access another Steward Bank platform.

The products are meant to enhance the banking experience of customers by appealing to accessibility and user-friendly needs. Here is a primer of their latest products;

Batsi is a Bot that will increase responses to customer queries by seconds compared to waiting for close to an hour to get a response from a human-assistant. Batsi is a major highlight of the exhibition because it underlies Square 2.0 and social media banking.

The Bot will also be used to access banking services like requesting mini statements, bank balance enquiries, sending and receiving money etc. Batsi’s assistance will change the landscape of conversational commerce in Zimbabwe because many banks haven’t adopted this technology hence Steward banks initiative could cause ripple effects in terms of similar adoption of Bots by other banks.

This product is characterized by accessing banking services using Facebook, Twitter, Instagram and WhatsApp. But as for now, Steward Bank says that Facebook banking is the only kind of social media banking that is readily available for use whilst it continues to develop and enhance other social media banking platforms.

But this is a bad timing for Steward bank to introduce Facebook banking because of the current scandal that Facebook is involved in. Steward customers who are keeping abreast of this Facebook issue may shun this newly released product.

The modified platform will serve the interest of individuals, corporates and agents. The best part of online banking is the security feature of 2 Factor authentication that will allay fears of hacking from savvy users of online banking.

Steward bank has introduced a modified version of their integrated Square platform. Square 2.0 features a new attractive interface that includes functions which are not available on USSD, unlike the previous Square App. Batsi the Bot will stimulate increased user experience due to the supposed timely responses.

This App will be available on the 12th of April. Until then, it remains to be seen after some time whether Square 2.0 does not consume a lot of data because customers would simply stop using the app.