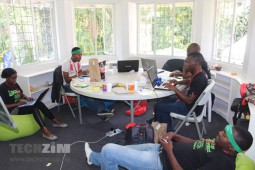 One of the questions that readers here at Techzim kept asking us was what happened to the Innovation Fund that was talked about way back in 2016. This fund was set up by the ministry of ICT through POTRAZ to be a revolving fund to finance tech startups. When our readers ask us, we forward those same questions to the powers that be and getting an answer to this particular question was not easy…

When the fund was announced, we all thought that meant it had been launched. Apparently we were wrong. Finally we got a response to our incessant questions and the answer to it was that the fund had not been officially launched. The president of the republic needed to launch it first before any info could be out. Well the then president of the republic was ‘not couped’ out of office last November. Now, today the new president is launching the fund.

However, although not launched, the fund was operational and we are expecting to hear details about who got what money so far.

In his address at the launch a few minutes ago, the POTRAZ Director General, Dr Gift Machengete announced that 188 applications for funding under this drive had been received. Only six of them were successful in their application. That is a success rate of 3.2%.

I know it sounds low but to be honest startup success rate is generally even lower than 3% so the rate could be fair.

Dr Machengete said most of the adjudication was done by members of academia. Those of you who have followed my articles obviously predicted that I have a problem with that.

You are right, I don’t think academics understand startups enough to be the major yardstick to evaluate who can be funded and who can’t, let alone academics in Zimbabwe.

Entrepreneurs should be judged by entrepreneurs, period. Well not exactly, other professionals could also be involved especially investors and bankers. More investors (angel and VC types) than bankers obviously.

Tecjh entrepreneurship is even more tricky. I am not convinced that we have enough academics who even begin to understand the business models that drive tech businesses let alone assess new ones.

Keep glued in, we will be updating you on other announcements as they come. You could also watch the live stream here.