I have to start by warning that what follows is a long article. I hope you’ll stick through it even when I seem to get lost in the narrative. Here we go:

This past month we have seen the Indigenization laws change in Zimbabwe.  This is something that has always bothered me. Full disclosure, I am 3rd generation Zimbabwean but I have no indigenous routes in the country.  My mother is Zambian, half English and half Illa. She was born in the Nawmala province.  My father’s family has Indian, Zulu, English, and Khoikhoi blood. However, at my core, I am a Zimbabwean.

Growing up, I was always envious of Zambians because they would say “One Zambia One Nation”.  Some would go and make fun of the saying and add “One Banana, One Plantation”. When Kaunda came into power, he wanted to build a nation so from the very beginning, he made it clear.  If you are Zambian, you are Zambian. Zambia does not belong to the Bemba tribe, the Zulu tribe, or the Illa tribe, it belongs to everyone.

One Zimbabwe One Nation

Should we adopt a similar saying for Zimbabwe?    What would this mean for us? Would we be able to have an inclusion policy for the Ndebele’s, Asians, Europeans, etc.  Well, this new Indigenization policy might help but I don’t think its an inclusive policy. It still favors certain people.

Should we look at the Botswana model?

I have always been fascinated by Debswana.  It was founded in 1969 and is a joint venture between the Government of Botswana and the De Beers mining company.  When I say Joint Venture, I mean it is 50% owned and controlled by the Government of Botswana and 50% owned and controlled by De Beers mining company.

How has this helped Botswana?

The mines owned and operated by Debswana are:

Orapa diamond mine, opened in 1971

Letlhakane diamond mine, opened in 1975

Jwaneng diamond mine, opened in 1982

Damtshaa diamond mine, opened in 2003

The four diamond mines have contributed significantly to Botswana’s socio-economic growth through diamond revenue.  It has transformed the country from an agriculturally based economy in the 1960’s to a country that has consistently showed one of the highest economic growth rates in the world.

How does this compare to Zimbabwe’s diamond mining operations?

When diamonds were first discovered in Marange, I was convinced that the government would use these new resources to transform Zimbabwe into the next Botswana.  $15 Billion dollars later, I mean 15 years later, it turns out that nothing much changed.

The difference is that all diamond mining in Botswana is controlled by Debswana.  There are no private diamond mining operations in the country. They have managed to produce nearly a quarter (30 million carrots) of the world’s annual production of around 130 million carats (26,000 kg’s).  Debswana is the second largest producer by volume.

This revenue has managed to transform Botswana from one of the poorest countries in the world when it became independent in 1966 to a “middle income” nation, with $9,200 per capita income in 2004.

Botswana is considered by Goldman Sachs as the safest credit risk in Africa.  Diamonds account for fully one third of the nation’s GDP, over 90% of earnings from exports and 50% of government revenues.  Debswana is the largest non-government employer in the country, employing approximately 6,300 people, of whom over 93% are Batswana.  Debswana is also the largest earner of foreign currency. In other words, they don’t have to arrest people of externalization because its against their best interest.

The question is will this new Indigenization law have the same effects as Debswana or is it just more lip service than anything else.

Zimplats has agreed to sell a 31% stake to the National Indigenization and Economic Empowerment fund and 10% each to the Zimplats Mhondoro-Ngezi Chegutu Zvimba Community Share Ownership Trust and an employee share ownership trust.

How does this compare to the Botswana model?

Zimplats managed to mine a record 7 million tonnes of ore (FY2016: 6.6 million tonnes). Bimha Mine redevelopment remains on course to reach design production in April 2018. The development of Mupani Mine (replacement mine for Rukodzi and Ngwarati mines which will be depleted in FY2022 and FY2025 respectively) was approved by the board and commenced during the year and is progressing according to plan in terms of both time and cost. Ore milled increased by 4% to a record 6.7 million tonnes (FY2016: 6.4 million tonnes). Platinum production for the year at 281 069 ounces decreased by 3% from the 290 410 ounces reported in FY2016. The FY2016 metal production included metal realised from the sale of concentrate stockpiled during the furnace shutdown in FY2015.

Since the previous Indigenous laws were implemented, it looks like Zimplats expansion projects have been decreased.  This makes sense because investors want to get their money out. 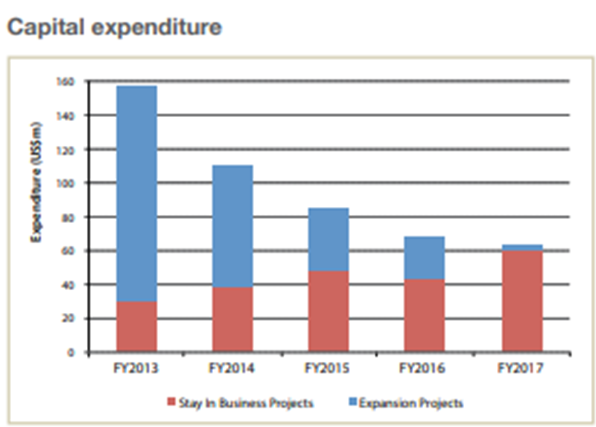 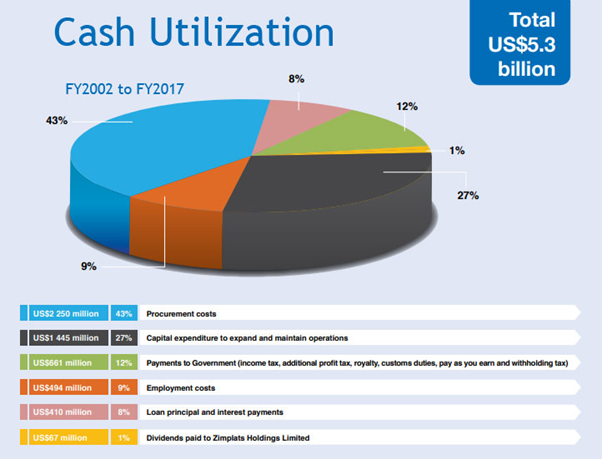 Looking at this pie chart, one would be excited about this graph.  Over the past 15 years, US$5.3 Billion has been spent. Only 1% has been paid out to shareholders.  12% of cash has been paid to government in the form of income tax, additional profit tax, royalty, custom duties, pay as you earn and withholding tax.  That’s roughly US$681 million. How does this compare to Botswana? The Botswana Government’s income from Debswana reached US$701 million (P5.96 billion at current rates) in 2013, representing a 35 percent drop from the US$1.08 billion (P9.2 billion) recorded in 2011.

Anglo American owns De Beers.  They are the world’s largest primary producer of platinum (accounting for about 38% of the worldwide annual supply) and mine many other things like diamonds, copper, nickel, iron ore and metallurgical and thermal coal. Many subsidaries belong to Anglo American: Anglo-gold, AngloGold Ashanti, Anglo American Platinum (Amplat).  As a company, Anglo American platinum production (metal in concentrate) was up 2% in 2017 to 610,100 platinum ounces compared to Zimplat’s 281 069 ounces. As a country, Zimbabwe produces almost 50% of what Anglo American does.

As a response to this, the hacktivist group Anonymous, took down their websites. The group left the message:

“Anglo American, you destroy nature and pursue and kill indigenous people,” said OpGreenRights’ statement on the hack, “In the name of tribal leaders, whom you have offended, and the natives you have deported, in the name of the miners killed during a strike against your dirty company, in the name of nature that you consider as a source of gain: We curse you!”

Changes in the automobile industry may make or break Zimplats.

Anglo American is betting big on hydrogen fuel cell vehicles as it tries to squeeze more profit from its platinum reserves, but risks being left behind as rival miners look to cash in on battery-powered cars.

Other big miners such as the Arcadia lithium project, Prospect’s flagship asset,  located on the outskirts of Harare, are positioning themselves for the shift away from the combustion engine by betting on lithium and cobalt, both used in electric vehicle batteries.

The ZRA said earlier on Tuesday it had issued a preliminary tax assessment of 76.5 billion Zambian kwacha to an unnamed “prominent mining company” for classifying imported goods as mining machinery, which attract no custom duty. Last year, the ZRA was tasked to raise K37.6 billion in the 2017 for the treasury.  So, the 76.5 Billion is almost double what they collected in 2017.

As mining companies are making more money because of rising commodity prices, governments around the world including Indonesia, Tanzania and Democratic Republic of Congo, are demanding a bigger slice of revenue from miners.

Transfer pricing can be described as a practice that involves a company buying a product from a subsidiary at a lower price, often to evade tax through declaration of losses, and sell it later at a higher price to a third party.

Mining companies, which own major mining companies in Zambia and other African countries are known to use these tactics to evade paying taxes.

US-BASED consultant SAG Harbour Group managing director James Henry stated that “Mining companies have got global networks, so there is need for the country to grow an auditing staff in the revenue service [ZRA] that can handle international pricing issues, which is a major challenge,” he said.

We need to be vigilant and keep these mining companies accountable.  As mentioned, Zimbabwe has made some changes and we have yet to see the effects.  Botswana has benefited tremendously from the Joint Venture with De Beers. Zambia has not benefited much from their Copper.

De Beers is already using Blockchain technology in resources such as diamonds. As stated by PWC, diamonds are imprinted by a QR code linking to a digital token “verifying their quality, ethical extraction and authenticity.”

Much like blockchain applications, this process cuts down on fraud, theft and insurance costs, as well as creating a more transparent viewpoint of “the custody of goods.”

“Smart contracts” are a chain of commerce and a way of remotely policing workers. If a gold mine is in Cambodia or another developing country, and the firm is headquartered elsewhere, business standards can still be upheld everywhere. For example, BHP Billiton is using blockchain for their supply chain.

Blockchain applications make it easy to sign contracts electronically and without having to rely on a third party to verify whether it’s valid or not. Why? Because blockchain is a digital ledger, that makes it possible for it to keep track of every transaction and “safely encrypts”

According to a Globe and Mail article from earlier this year, Halifax start-up Peer Ledger’s blockchain-based Mimosi application is able to track precious metals within the supply chain “to ensure every milligram purchased by buyers has come from an ethical source and is not funding armed conflict in war-torn countries like the Democratic Republic of Congo.”

Peer Ledger’s Mimosi platform uses blockchain to “instantly” ensure that its users know the origin of the precious and industrial metals.

We need to take this a step further and pass legislation that forces mining companies to use such technologies, so governments can also “instantly” know the destination of our minerals.  We need to tax these companies accordingly. Simply taking control of or part ownership is not the only solution. They can play games with their financial records and make sure most of their profits are made in Switzerland.  This Swiss have no problem with this arrangement because they will get paid 30%-40% of the Trillions these companies are making. This benefits already developed companies, but the developing countries don’t get a penny. This needs to change.  The status quo needs to change. Blockchain can help change this corrupt system.

2 thoughts on “Yes Indigenisation Law Has Changed But The Remaining Sectors Should See Better Policy. Blockchain Could Help”