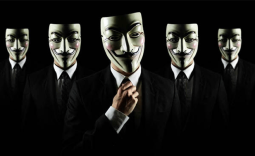 So when we spoke to Anonymous, we didn’t think they would mention of all things our coup-not-coup but they did. Is there any chance they played a role in Bob’s demise?

For the uninitiated, Anonymous is a decentralized international ‘hacktivist group’ that is widely known for its various DDOS cyberattacks against several governments. You may remember their hack on Donald Trump’s website back in 2015. Here are some of their more popular hacks.

Locally they have also targeted a number of websites including; Herald, Econet and Zanu PF among others. We managed to get in contact with Anonymous Africa and asked them a few questions concerning why they do what they do and other things that we thought were interesting. Here are the responses we got:

1) Why do you hack? Are there any guiding principles or a manifesto?

We hack because we are hackers. Its more than just an action as many perceive it to be, it’s a state of mind. For us, hacking transcends technology. Its not about breaking into something or doing something illegal that drives us. Neither is it money or power. It is simply the crime of curiosity. Working out new an better ways to make things, people and systems work. Like most hackers, we do draw a lot of inspiration The Mentors, “A hackers manifesto”. Almost every hacker can self-identify with the meaning behind those words.

2)  Can you hack on behalf of someone e.g. someone requests for you to hack another website/organisation etc

We can, and we do not. For us to get to the point where we are willing to use our skillset to try push an issue, times are desperate and civilization and the authorities have failed to protect humanity. We always put justice before the law. When we knocked the country of Zimbabwe offline, we did so not out of spite for peoples in Zimbabwe, but to remind the world that justice had still not arrived and we would not let them forget their responsibility.

3) Thus far, how effective has it been, have you solved the problems you set out to solve?

Build your own identity before joining someone else’s. You do not have to ask us to join us. You will know when you are us. It is not something we decide, it is something you achieve.

5) Do you guys have educational workshops where you can teach other people to hack?

Our natural curiosity is what drives our learning. Making wanting to work how we want it to work. We do not have formal knowledge and we honestly believe that beyond the basics, most formal knowledge is a time waster. Find what you want to build, and build it. You will learn to hack in the process out of necessity. If you look at our first point. Hacking is not something you learn in a text book. It’s a mindset. How you look at reality. The best hacks, do not involve technology.

The most important bit of information that people need to know about hacking. It transcends technology. The sooner a hacker becomes aware of that the more they will be able to build what they want. Always remember, with power comes responsibility. If you are going to die or go to prison for hacking, make sure you are proud of what you are doing and it is worth your freedom. A hacker has incredible freedom, but it is not without responsibility or its own sense of duty. That duty is always to humanity.

We are entering an exciting new world, and I wish all the hackers out there the best of luck, keep learning, keep questioning, keep testing the truth. Always change your data based on the balance of empirical evidence, no matter how bizarre. There are a lot of hooks in the water out there for young hackers. Those that sell out are going to be trapped all their lives. Those that persevere and persist to slowly pull down the walls of their own ignorance, one brick at a time. Will be the ones that truly level up.

To prove that we were indeed in contact with the group they uploaded this  and this via twitter.

13 thoughts on “Was Mugabe Hacked Out Of Office? Spoke To Most Popular Hackers In The World And They Kinda Think They Played A Part”