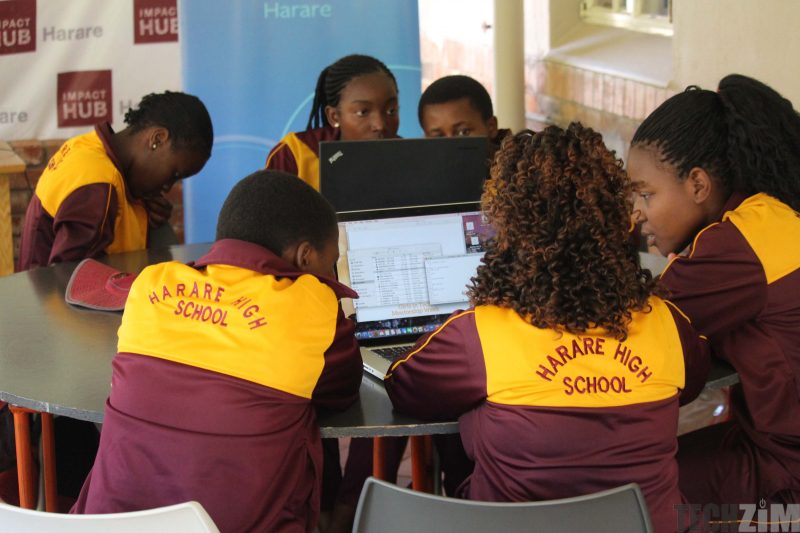 We talked about ZimboPy and their coding initiatives; some of which are specifically for girls only. They have worked hand-in-hand with Pycon to bring to bring Django girls –a free workshop that was aimed at empowering girls through Python- at last year’s Pycon conference. This week ZimboPY was hosting their Mentorship Week.

The Mentorship week had the same aims as Django girls and was free as well. Yesterday we spent a few hours at Impact Hub Harare as we got a chance to be a part of the ZimboPy’s impressive mentorship initiative.

The in-person sessions(sessions where girls had to attend) were done on Monday and Tuesday the 2nd and 3rd of April respectively. From Wednesday to Friday the mentorship week will continue on ZimboPY’s Facebook. They will post more mentorship resources such as tutorials and more advice from mentors.

What was on the menu?

The second group was comprised of university students or students who would have some basic knowledge of programming. This group was learning more technical stuff as they were learning how use the Raspberry Pi and coding for it via Python as well.

Some of the projects they got to work on…

The students got to work on a number of different projects, including some games, number counting systems, and an e-commerce platform that links vendors with farmers.

Among the foreign mentors, there were video call-ins from developers such as Mike Place from the United States ( who also happens to be a part of the ZimboPY team) and other developers from the Facebook Developer Circles in Nigeria. Apart from giving advice to the students, the mentors who were calling in were also answering specific questions from the students.

On that note, if you are a local developer who is interested in becoming a mentor you can check out this page.

If you’re reading this and feeling like you or someone you knew missed out ZimboPY’s next mentorship week will be in August on the 13th and 14th. If you’re interested in signing up as a student, you can do so here.